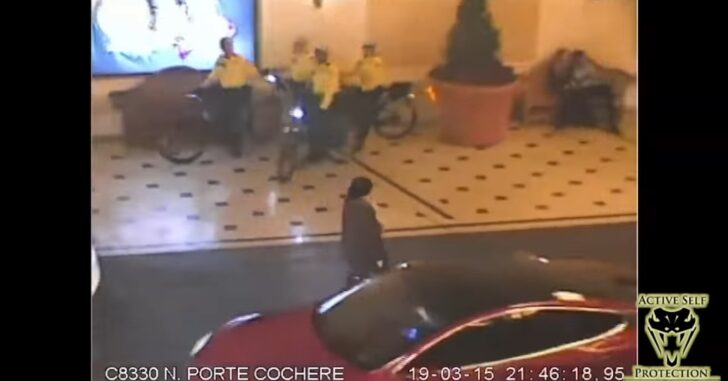 This is an incredibly brave robber, not really having an escape plan but also not really caring about anything.

He successfully robs the casino, a dumb feat to attempt in the first place. He then makes his way outside.

He can’t find a car to steal. He goes to an occupied vehicle, flashes his handgun, but that driver is having none of it.

At the same time, 4 police officers on bikes are sitting right outside the entrance, but are unaware of what’s going on until they hear the call over the radio.

Once they realize that they are right in front of the call, they spring into action. One officer is shot in the vest by the robber.

Another officer, who came around the other side, fired a single shot -while running- that struck the robber in the head.

He went down immediately and did not make it.

This is a pretty crazy video, even if it’s just for the fact that this robber seemed to believe that nothing could stop him.

Previous article: Burris Eliminator III Special Deal. Check Out This Smart Riflescope! Next article: Armed Citizen Shoots And Kills Burglar, Goes Back To Bed And Then Calls 911 In The Morning