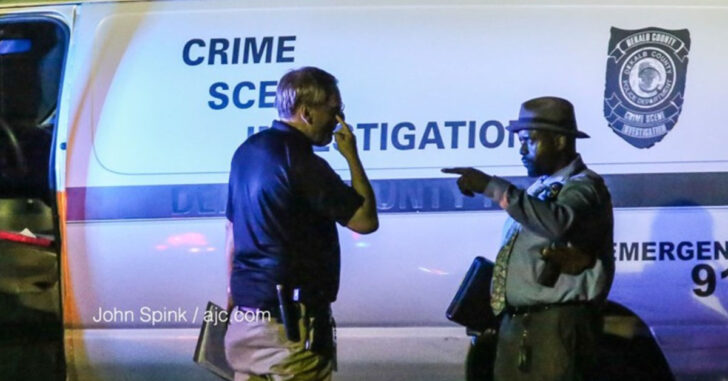 Roy Farrell, 39, and his 16-year-old son shot and choked a man who held the son hostage and tried to rob them — and they did it with the robber’s own gun.

As The Atlanta-Journal Constitution reports:

The suspect initially approached the son outside his home and asked for marijuana, according to a police report. When the son, who was not identified, said he didn’t have any, the suspect told the teen to ask his father for a cigarette.

Just as Farrell was about to get the cigarette, the suspect pulled the gun on the son, aimed it at his head and told him not to say anything. When Farrell walked out of the home, police say the suspect demanded his wallet. Farrell, seemingly unprovoked, then told the suspect where he banked.

They drove from the apartment to a SunTrust Bank on I-20 at Panola Road and backed into a parking space, Lt. Shane Stanfield said. But when they got there, the suspect made one mistake: he sat his gun down by his side. Farrell reached for the gun and told his son to choke the suspect, police said.

As the son choked him, police say Farrell shot the suspect five times. One of the shell casings was found above his head.

Although it would have been preferable for the father to have been armed for the start, or for the teenager to have told the guy to buzz off after he was solicited for marijuana, we can accept this result just fine.