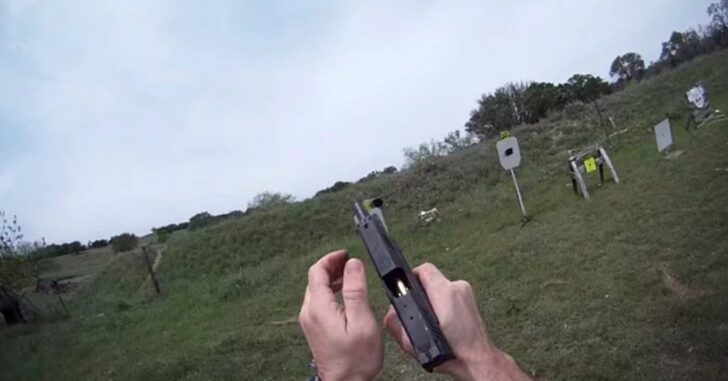 By Kyler Kee via TTAG

Failures of gear or training can kill you. Pure and simple. Finding those failures and exposing them to the light of day is the reason TTAG writers work so hard, and burns through so many rounds, and spends so many hours on the range.

The gear side is pretty easy. If it breaks or fails, don’t use it. But if the operator is the issue, that can be a little harder to root out. Watch the video above and read on for my discussion of my own failings.

We get questions occasionally asking why we abuse guns when we review them. Truth be told, I’m a pretty cleanly gun owner. My personal firearms sit in the safe, carbon- and copper-free, coated in a light film of oil.

But the guns that we receive for review get used and abused like a fully insured rental car. I run them as they come out of the box, with no regard for their health or well being because some gun owners treat guns like that in the real world. We try to simulate the worst case scenario a gun is likely to experience.

Similarly, it’s important to expose the flaws in the operator. And the only way to do that is the same way, through abuse.

I got my first exposure to stress-induced failures early on in my pistol shooting career at a session with KR Training. As soon as the gun command sounded, I immediately forgot all the lessons I’d just learned, tea-cupped the gun, and started dropping rounds low and left.

Then my gun ran out of ammo, and I fumbled a mag change. In reality, there wasn’t any actual stress, but it sure felt that way. Watching my mag slip free of my hands didn’t help my stress level one bit, either.

Several years later, I found myself at the Bushnell Brawl shooting a moving target with a XD(M) 4.5 that Springfield Armory had sent for testing and evaluation. I had already shot several hundred rounds through the gun in the months prior and found it to be endlessly lovable, accurate, and dependable.

It was so dependable that I was carrying it daily. But within three shots in a mildly stressful environment, the slide locked back on a loaded mag. I quickly diagnosed the failure, racked the slide, and got back on target. And continued to have issues.

I lost count, but I think the slide locked back some four or five times over the course of that stage. Each time, I quizzically looked at the failure, racked the slide, and dropped a louder F-bomb than the time before.

Like a similar failure I had with an FNS-9 at Run n Gun, I took it to the local indoor range, and sat idly by as round after round hit paper accurately with no failures. Perplexed, I took it to my ranch where I’m allowed to draw, move, and shoot, and…wouldn’t you know…I got the slide to reliably lock back mid string.

The cause of the failure? 100% operator error.

I’m not able to the hit the range as much as I’d like, so I spend a lot of time creeping around my house, moving, drawing, and dry firing. It seems that in the preceding months, I had developed a very nasty habit of gripping the gun high with my support hand, smashing the meat of my thumb into the slide lock, pushing it upwards.

Naturally, the slide tends to lock back when you do that. And over the course of many thousands of simulated rounds, I had burned that movement into my muscle memory.

You can see in the video above at around the :40 second mark where I change my grip…and the problem disappeared. Thoroughly frustrated with myself, I tried the same drill with my RDS-equipped M&P9 and saw no such failures. Which meant that my M&P9 got promoted to EDC gun. Yes, my red dot might die, but I’ll take a backup iron sights over a malfunction-prone gun/operator combination any day.

So where do we go from here? The high support hand grip doesn’t seem to improve my accuracy, and it has been scientifically proven to diminish reliability, so it has to go. Which means many more thousands of simulated rounds with a keen eye towards proper presentation. And, of course, lots more simulated stress to see if I still fall back on bad habits.

I remember talking to Smokey, the coordinator of Run ‘n Gun, who told me that if your gear can work 100% reliably at Run n Gun, it would do just fine in the real world. I don’t think running seven mile biathlons is completely necessary to give you and your gear a rough shakedown, but I do think you should step outside your comfort zone often.

Local competitions are great for this sort of thing, but if you don’t have them nearby or have another aversion, do anything you can to push yourself. Buy a shot timer (or download a free app).

Sometimes the loud beep is enough to push you. Don’t own a smartphone or lack a desire to own a shot timer? Take a friend to the range and have them give you a “gun” command with a loud shout.

Better yet, have that friend load a random snap cap in your EDC pistol without letting you know. Exposing your weaknesses is uncomfortable, but doing so is the only way to make yourself a better competitor. And who knows…one day it might save your life.

Previous article: In the Hunt - 02 - Thinning the Herd Next article: News Article Tells Us That Burglar Shot By Homeowner Is The Victim. What?