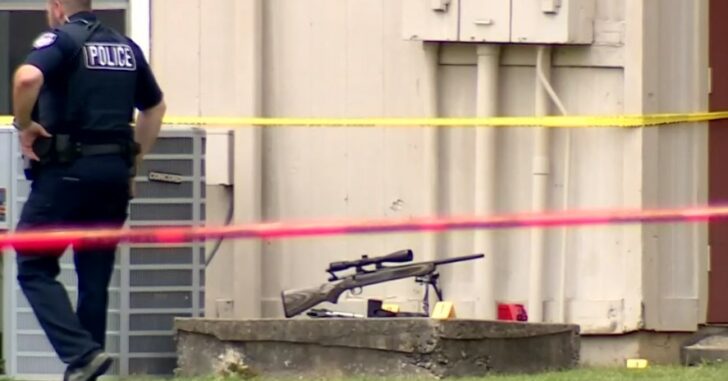 FORT SMITH, ARKANSAS — An attempted mass shooting was stopped by an armed citizen and his hunting rifle, after seeing a man shoot and kill someone at an apartment complex and then fire on others. Before the suspect was taken down, he unfortunately was successful with killing 87-year-old Lois Hicks, who was gunned down inside her apartment.

Witnesses say the suspect yelled and tried getting people outside of their apartments. Hicks was one person who did come out, to console the suspect, according to witnesses. When people realized that he had a gun, they ran back inside. After the suspect shot and killed Hicks, he continued on.

[The suspect] continued to shoot his rifle at neighboring apartments. A resident at the apartments heard the gunshots and got a hunting rifle which he used to shoot and kill Arnold.

Neighbors who witnessed the shooting say [the suspect] was trying to persuade people to come outside of their apartment buildings.

“He was yelling and screaming, “You guys get out here, come out here, everyone get out of this building right now,” says Janey Peugh, a resident of the apartment complex.

As the 26-year-old suspect continued firing, as mentioned above, a resident grabbed his hunting rifle and shot and killed the suspect, ending the assault on the residents of the apartment complex.

A screen shot from the above video shows a rifle, believed to be the rifle used by the armed citizen to take down the suspect. The suspect’s rifle was identified by police as a semi-automatic, while the one in the image below seems to be a bolt action.

Hicks is said to have run back into her apartment after seeing the gun, but failed to close the door. That’s when the suspect went inside and did what he did.

Many more lives could have been taken, and it seems the suspect was trying to achieve just that.

“If he had not done that, we don’t know how many people could’ve died,” said Property Manager Cherre Miller.