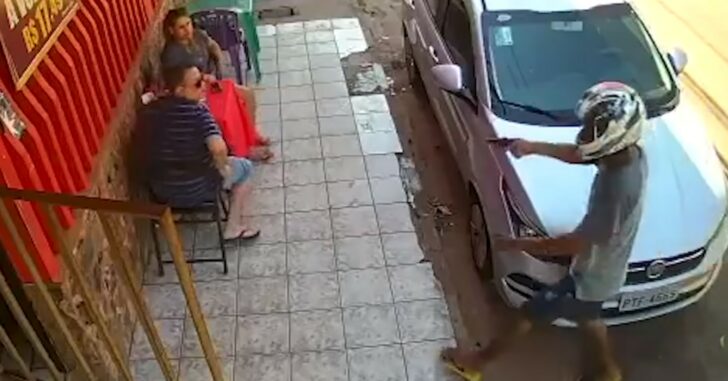 The couple is seen sitting at a table outside of a store when the bad guy comes up on the right side of the screen. He wastes no time pointing the gun at them, but then it’s on immediately.

The male target immediately goes after the robber’s gun, while simultaneously drawing a gun of his own. They get into a scuffle, and that’s when we see the female target take some steps back. These steps back are the game changer here, as she has the time to draw her gun and take shots at the bad guy.

Once this robber realizes that he has become the target, he runs for the hills.

There are many lessons to learn here, and many things could have gone wrong. Give the video a watch.

Did you see that? The guy who fought with the armed robber magically has two guns. That made us lol, just a little.

Previous article: Pastor And Wife Take Down Burglar Together With Multiple Guns And Multiple Rounds Next article: CA Teacher, Who Is Also A Cop, Suspended For Legally Having Handgun In Classroom