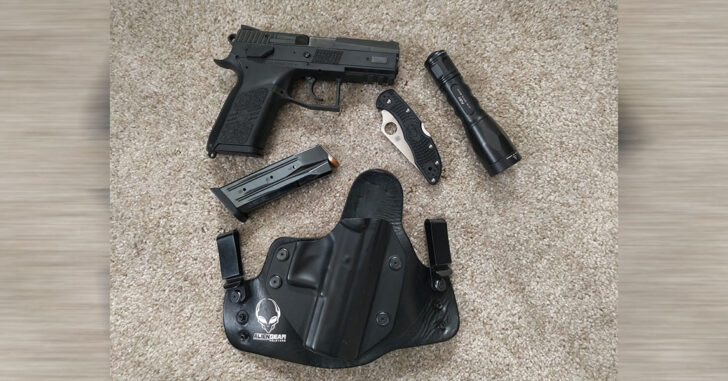 The acronym EDC, which stands for Every Day Carry, has developed a cult like following in the past few years. There are entire online forums devoted to this endeavor and the favorite activity of these forum participants is to post pictures of their current EDC (it appears particular EDC items change frequently for many). These photos will display a whole host of items that can be worn on the belt or crammed in pockets. In this article I want to address the primary tools that an armed citizen should be carrying on a daily basis.

Humans like tools and gadgets, so the EDC craze is not really surprising. When it comes to those of us who carry a firearm, we typically consider the gun and supporting equipment the center of our own EDC. Often, the gun itself is the largest and most difficult item that we actually carry on our person. Most people that carry a gun also carry a variety of other items along with it. The reality is, in our mundane civilian life, we don’t wear load bearing vests to support our gear, and while we like carrying things that can be handy to have we need to balance this with convenience and practicality. This article is intended for the concealed handgun carrier who wishes to evaluate what they are actually carrying, and why.

Once squared away with your carry gun, what should you be carrying along with it? This is a very personal decision, but there are some items that are fairly universal among those that carry a self-defense firearm. I have several items that I carry all the time, and some other items that are optional. For me the necessary items, as they pertain to self-defense, are the gun, a reload for the gun, a knife, a flashlight, and a cell phone. I carry at least these five items whenever and wherever I can be armed. I will share with you my rationalization for each.

The Gun. I carry a handgun because it is by far the most efficient form of self-defense you can carry concealed on your person and I always carry except when denied that right. There is no other concealable weapon that can be as effectively used to protect yourself and those you care about. Even a small handgun that is easy to carry and conceal can dramatically turn the tide of a bad situation if you have sufficient training with the weapon.

The Reload. There are two reasons to carry a reload, meaning at least one spare magazine for an autoloader or a speed strip or speed loader for a revolver. The first is obvious; you may need more ammunition than what is in the gun itself. Most civilian self-defense situations do not involve reloading. Typically after guns run empty people run away. However, there have been incidents which have required more ammo than what the defender had initially in the gun. The second and equally important reason for a reload is that many malfunctions that can happen involve the ammunitions source, this being particularly true for an autoloader. With some forms of malfunction the only way to make the gun work again is by replacing the magazine. Carrying an extra mag is inconvenient. It takes space on your belt or in your pocket. But I always carry a reload whenever I am wearing the gun for the mentioned reasons.

The Knife. Now, many people will carry a tripped out tactical fixed blade or folding knife on them as part of their weaponry. There is nothing wrong with this, as a knife can be an effective defensive weapon within contact distance. However, this is not the primary reason I carry a knife. Generally, those of us that carry a gun are people who believe in being prepared and self-sufficient. A knife is of absolute importance if you wish to be prepared for any kind of emergency, or just any daily cutting task. I consider the knife to be an essential rescue tool.

I once found myself trapped in a car by a seat belt that would not release. Nobody in the car, including myself, had a knife. I was literally trapped in place. My younger brother ran into a nearby store and borrowed a box cutter to cut me out. That was the last time in my life that I had no cutting tool on my person. I typically carry a fairly large and robust folder that can handle any cutting task, but on occasions where legality or concealment is an issue I will carry just a small folding blade of some sort. Even a key chain multi-tool with a knife on it will save your life if you have to cut yourself free of, say, a seat belt!

The Flashlight. I firmly believe that if you carry a gun you should have a flashlight on your person at all times. The reality is that flashlights are very rarely deployed in civilian defensive shootings. Most bad things tend to happen in low light, but in environments that have enough ambient light that a flashlight does not become involved. There is an entire industry built around the production of tactical handheld and gun mounted lights. There is also an entire training industry built around the use of these devices while fighting. The truth is, this art plays a small role in civilian self-defense. However, the light proves to be an invaluable tool in several regards. If you have a light mounted to your carry gun that is great, but also carry a handheld light as the light on the gun forces you to point a gun at anything you need to illuminate.

If you find yourself in a potentially dangerous situation in the dark, having a powerful hand held flashlight to illuminate your surroundings is of great value. This allows you to identify what is happening. It also allows you to recognize a potential threat, or simply an innocent party. The light also serves as a deterrent. Criminals are opportunists, and when a potential victim in a dark place turns on a blinding light to shift the balance of power, this can be persuasive. Finally, the light is an incredibly useful tool for more routine tasks. Have you ever dropped your keys under your car in a pitch black parking lot? Exactly.

The Cell Phone. This day and age, everyone has one. For you as a concealed carrier it is even more important. As it relates directly to self-defense, should you be unfortunate enough to actually need to use lethal force, or even be forced to draw your gun in self-defense, you need to call the authorities immediately and report what happened. You also want to be able to call for help if there is any time to do so during a crisis. Obviously, the cell phone is an integral part of being prepared for trouble and you should always have it on you when carrying.

I think the need of the five discussed items is standard and should be carried at a minimum. I personally believe that it is also best practice to carry a small trauma kit consisting of a tourniquet and hemostatic agent to stop severe bleeding and to get training in the use of this gear. There are such kits available that now easily fit in a pocket. A trauma kit is useful for a far greater variety of situations than just self-defense, as you may need it to care for yourself, or perhaps someone else, in the event of an accident. I also suggest carrying a less-lethal self-defense option such as pepper spray or a tactical pen. This gives you the ability to defend yourself from a hostile, yet perhaps not lethal, threat and do so without resorting to the lethality of a gun or knife. Keep in mind that such tools demand training.

Other things frequently promoted for EDC tend to fall into a category of useful but not essential for most folks. A good example is a multi-tool. These things are amazingly useful. The bigger and more capable the tool the bulkier and heavier it will be. Another item that many insist is critical is a lighter. I often carry one, even though I don’t smoke, because it can be useful. However, I believe the actual usefulness of a lighter is dependent on your lifestyle and situation. Most folks living in suburbia probably don’t need to carry a lighter actually on their person as a survival tool. For folks living in rural areas who spend a lot of time in the outdoors, I think it makes good sense.

So, there is a highlight of the things I think are worth considering for carry on a daily basis. I firmly believe that the essential five items I listed should be carried at all times if you carry a handgun. The others are optional and can be quite useful, but realistically are not essential for most people. Base your own carry items on reality, what do you actually use in your daily life, and what could you not do without should something bad happen. That should help you formulate your own EDC. Useful tools are not very useful if you don’t have them when needed.