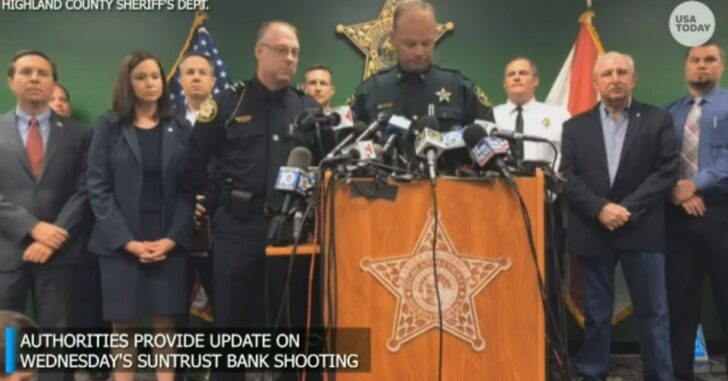 Conference begins at the 5:55 mark.

During a brief and heart-wrenching news conference this morning in Highlands County, Florida, officials released all the available information about yesterday’s SunTrust bank shooting. The video is not easy to watch.

The shooter “knowingly and intentionally took the lives of five of our fellow community members,” Sebring Police Chief Karl Hoglund reported, barely restraining tears. “Our sisters, our mothers, our daughters, and our co-workers. Perhaps most unfortunate is that now, we refer to them as victims of a senseless crime.”

Three of the victims’ families had requested that the names not be released; the other two requested that they be shared. Those two victims were Cynthia Watson, a customer of the bank, and Marisol Lopez, an employee.

“The incident began yesterday at 12:30,” Chief Hoglund said, “when 21-year-old Zephen Allen Xaver entered the SunTrust bank with a gun. He immediately contacted bank employees and a bank customer and overtook the bank by force. He then shot everyone in the bank. After shooting them, he called 9-1-1. This occurred at approximately 12:36. He told dispatchers that he had killed five people in the bank. The wherewithal and the thoughts and the acts of the dispatchers were to maintain contact with him until responding officers could arrive.”

“At 12:44, a SWAT callout was done in hope that officers could assume tactical responsibility of the scene,” Chief Hoglund continued. “During crisis negotiations, it appeared he was not going to allow officers of my agency and the sheriff’s office access to the victims in the bank. At that action, I requested the sheriff’s office SWAT team make a tactical entry into the bank. This was accomplished at 1:54 p.m. […] Unfortunately, all of the victims had succumbed to their injuries inside the bank.

“[The shooter] has formally been charged with five counts of murder in the first degree. I cannot state how much I appreciate the assistance of our local partners, including the Sheriff’s Office, local law enforcement, the FBI, and the coordination and cooperation of SunTrust personnel, staff and leadership.”

Chief Hoglund also stated that SunTrust leaders were present in Sebring spending time with employees and families and were cooperating full. Several other statements were made before Hoglund returned to the lectern and invited a brief Q&A.

Florida Attorney General Ashley Moody announced that the state was paying for “grief counseling, loss of life expenses, and other things [the families] shouldn’t even have to think about.”

State attorney Brian Haas said: “As state attorney, it is my responsibility to prosecute this case, and that we will do. We have two responsibilities: To build the best case possible, to ensure prosecution that ends in a successful result while seeking everything we can, the maximum allowed by law. The second priority is to be there for the families of the victims. They are hurting today in an unbelievable way, and we want to be there for them to make sure that the terrible thing they’ve been through, that this next step, the criminal justice process, goes as smoothly as possible. […] This community is hurting unbelivably. Any community that would have a case like this happen with five murders would be so difficult, but a community the size of Sebring, it’s just unbelievable. But if there’s a place that can make it through this, it’s Sebring and Highlands county.”

During the Q&A, Chief Hoglund said that at this time, the shooting is believed to have been a random violent act:

Finally, Hoglund also stated that all five of the victims killed were women, and that surveillance video of the incident has been obtained and reviewed by investigators.

Previous article: [WARNING: GRAPHIC] Knowing When To Draw; Off-Duty Officer Loses His Life While Trying To Draw Firearm Next article: The Latest Mass Shooting In FL Should Be An Eye-Opener For The Masses