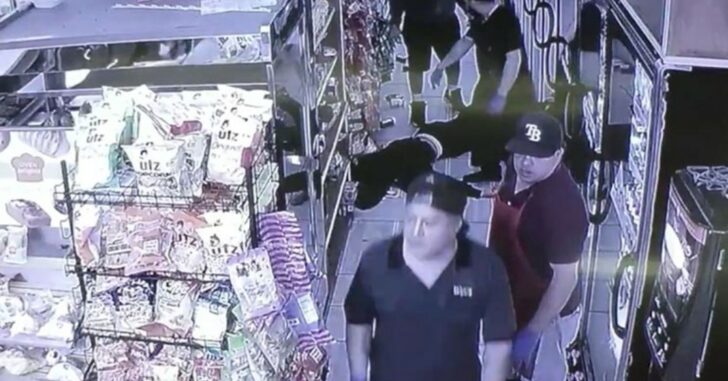 As the New York Post blares, ‘Scared bodega owners want panic buttons, stun guns to help to stop crime.’ As if we needed to say it yet again, this is what happens to a disarmed populace. This latest demand for the means of personal defense comes after gang members pounded a yoot in a Bronx bodega earlier this month. The only reason the kid wasn’t killed is that the store owner had the fortitude to grab a pipe and come to his rescue.

“They had him down and kicking him. More and more kids came in,’’ (Edward) Lara said of the youth and his attackers. “I have four workers, and they helped me. We pulled them off and threw them out.

“I closed the door, but they started hitting the glass. I went outside and pushed them back. One showed me a gun and a few had knives. I was afraid.”

Not every Bronx kid is so lucky. A 15-year-old was dragged out of another bodega in Juneand hacked to death with a machete.

No doubt more bodega owners would prefer the option to defend themselves from predators like this, but given New York’s unconstitutionally restrictive gun control laws, that’s no mean feat. However, last month . . .

The Bronx bodega owner who shot dead a robber is not expected to be charged, police said Monday.

The 43-year-old owner of the J Market on Morrison Avenue in Soundview, identified by law enforcement sources as Jin Jie Chen, was questioned by police and later released following the 10:30 p.m. Sunday incident at his store, cops said.

Chen — a legal gun owner — quickly called the police after shooting 32-year-old Daniel Meeks in the head when the thief jumped over the store counter to rob him, police said.

According to that Post story, Chen is…get this…a licensed concealed carry permit holder. Yes, in New York City. For a little perspective, the City that Never Sleeps has 8.6 million residents and fewer than 5000 concealed handgun permit holders. Those permission slips are mostly reserved for the city’s ultra-rich or politically well-connected residents who can grease the right palms. The fact that Mr. Chen got his hands on one is a minor miracle, but we’re certainly glad he did. Meanwhile, in Albany, Governor Soprano, fresh off his reelection victory over yet another hapless  GOP “challenger,” is promising still more gun control is in store for the Empire State.

“In New York, we are not waiting for the federal government to act,” Cuomo said in a statement Thursday after the (Thousand Oaks) shooting. “We already have the strongest gun safety laws in the nation, and in the upcoming legislative session we will take additional steps to make our laws even stronger to keep our communities safe.” …

“This is an epidemic,” Cuomo tweeted. “In the upcoming legislative session, New York will take additional steps to keep our communities safe. Congress should follow our lead. #GunControlNow”

We’re sure that New York City’s bodega owners are thrilled to hear that.