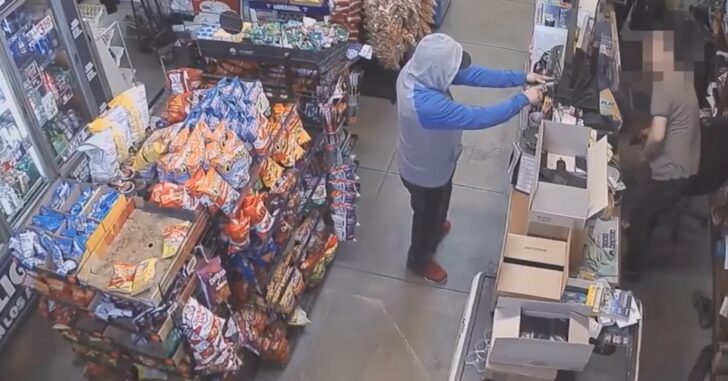 John over at ASP brings us another great video to show just how difficult it can be to defend ourselves in certain situations with a firearm.

In this particular case out of California, an armed robbery is captured on camera at a convenience store. The owner of the store is being robbed by a man with a gun, and this man is no stranger to crime, as he’s done this at least 18 times before.

After receiving the money from the register, it looks like this robber is still wanting more. Making a decision, the owner reaches under the counter to grab a gun of his own, and that’s when things turn bad.

A scuffle ensues and the end result is the robber getting away with both his gun and the store owner’s gun.

Watching the surveillance video, I didn’t see any great opportunity to reach for the firearm, although we all know that I would have had it on my hip anyway.

The reaction was a little slow and sloppy, and could have cost this store owner his life.

What do you think about this outcome? What would you have done differently?