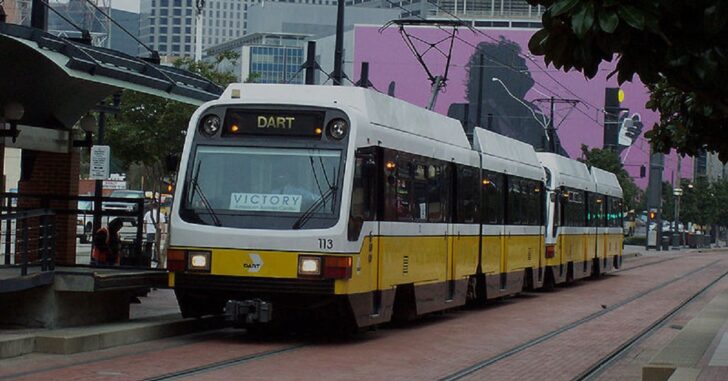 DALLAS, TX — A man on a Dallas Area Rapid Transit (DART) train opened fire on another man in his car, prompting his own arrest and a trip to the hospital for the man shot, CBS DFW reports.

The shooter was quickly released, however, and there was a pretty darn compelling reason why.

According to CBS DFW:

There was a shooting on a DART train around 6:30 p.m. Wednesday. DART said it happened on an Orange Line train at LBJ/Central Station near the Dallas and Richardson city limits. The station reopened shortly before 10:00 p.m.

The person who was shot, a man in his 40s, was rushed to the hospital with gunshot wounds to the chest, leg and shoulder. The alleged gunman, in his 60s, was arrested on the spot for assault with a deadly weapon. No one else was hurt.

The gun was recovered at the scene.

“We initially suspended rail service but opened for single-track service at that station after approximately 30 minutes. Trains are not opening doors at the station while DART PD investigates. A bus bridge is also in place,” DART said in an email Wednesday night.

A video that surfaced on YouTube shows a man claiming he opened fire on the train in self defense. When asked in the video if he was attacked, the alleged shooter said the other man came at him several times. He says he kicked the stranger in the chest and tried to kick him off the train before using his gun.

It’s worth noting that the armed citizen, later identified as Malcolm Skinner, was not charged after it became abundantly clear that the shooting was done in self-defense.

After the incident, witnesses told authorities that the man shot had been harassing a pair of women on the train. One of the women left at a stop and the other switched seats with Skinner, hoping to get a little distance.

The harasser didn’t like that, and he sparked the fight that ended with him receiving multiple gunshot wounds.

Previous article: Boy Killed While Riding In Family Car When Stray Bullet From Target Shooter Hits Him Next article: [VIDEO] Don't Let Your Firearm Turn Into A Liability: Choose To Draw Wisely