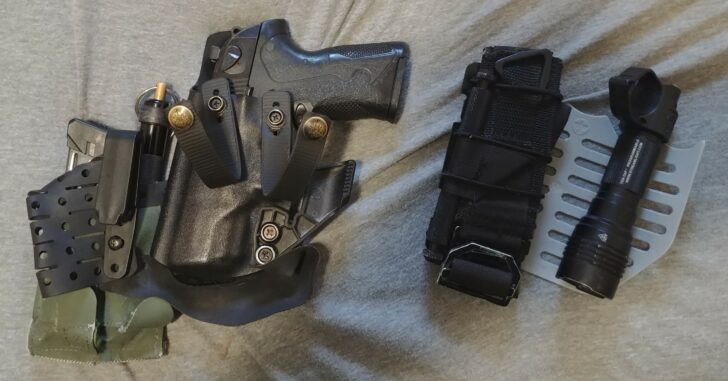 2) JM custom kydex wing claw 2. 5 attached to a phlster flex, along with a 20 round magazine and ASP street defender O.C spray.

3.a) I selected the px4 because of it’s similar manual of arms to the M9 I carried for work. Since then, I’ve made a number of simple improvements to the gun such as converting it to decock only and addressing one of the legitimate criticism of berettas.

3b) I’ve run the gamut of holsters over the years, including an unfortunate attraction to hybrids and a brief period where I carried a light on my gun. I eventually gave appendix a try and am now a true believer, especially using a pizza blaster such as this. The storms round grip works very well hiding the butt of the gun, and the heavy trigger and external hammer both add extra safety measures to the system. I had been using strong side holsters from JM in the past and seeing as it has a reputation of specializing in appendix rigs, it was a natural choice. The 2.5 has a minimalist design that has all the features you want while keeping bulk and excess kydex to a minimum. The wing acts as advertised and tucks the grip in, keeping the footprint of the gun to a minimum.

The flex is a recent addition, for those unfamiliar, it is a sheet of hyphalon that allows the attachment of holsters and accessories in one easy to carry package. It has greater flexibility then most traditional sidecar designs, both in customization and actual movement, and has the same benefit of keeping my equipment in one easy to carry package. In this case, I keep a spare magazine, (the higher capacity is to facilitate qucker reloads, not extended engagements,) and a less lethal option in the form of o.c spray. My eventual plans for it will most likely involve mounting an IFAC to supplement the tourniquet I already carry in my pocket.

Previous article: Store Owner Sees Robbery On Camera At Home, Goes To Store, Shoots And Kills Robbery Suspect Next article: #DIGTHERIG - Dylan and his Glock 43 in an Alien Gear Holster