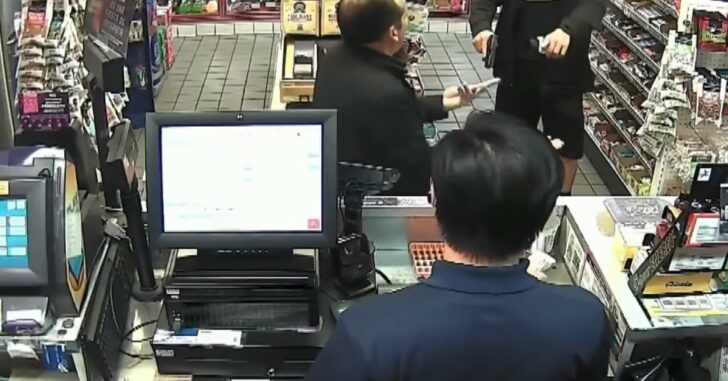 SOUTHERN CALIFORNIA — A man was inside a convenience store and purchased a pack of Mentos and before he knew it, an off-duty police officer had a gun on him.

The officer believed that the man stole the Mentos, and told him to put them back while pointing his firearm at him.

The man insisted that he paid for them, which the video clearly shows. After the cashier confirms to the officer that the man did in fact pay, the officer apologizes to the man.

There’s nothing like going into a situation with limited knowledge and then acting with potentially deadly force. I’m not sure what was going through this officer’s mind, but this clearly wasn’t the way to handle this situation, even if he did truly believe that the Mentos had just been stolen.

Of course there will be an investigation into what happened, and the Chief of Police made the following statement:

I want you to know that after I watched the video I found it to be disturbing, as I’m sure it was to you. However, because there is an ongoing personnel investigation and potential litigation against the city, I am unable to discuss the details of our investigation.

Previous article: Parkland School Shooter Video: "When You See Me On The News, You'll Know Who I Am" Next article: WATCH: Gun Goes Off While Holstered In Appendix Carry Position. Negligence or Accident?