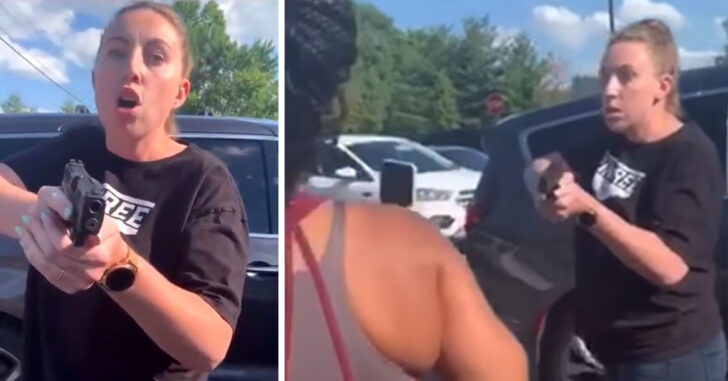 UPDATE 07/02/2020 @ 7:31 p.m. EST – Police held a press conference related to the below incident and announced charges against the couple.

Oakland County Sheriff Michael Bouchard held a news conference Thursday afternoon to address the case. He shared the videos and six different 911 calls. Bouchard said two people — the driver and passenger of the minivan shown in the videos — were arrested and are facing felonious assault charges, a four-year felony. They remained in custody Thursday and were expected to be arraigned in the afternoon.

The Sheriff also said that both were armed with handguns and both of them had concealed pistol licenses (CPL).

LAKE ORION, MICHIGAN — A heated exchange between a white woman and a black woman and her daughter ended with a gun being pulled after the white woman apparently bumped into the woman’s 15-year-old daughter and wouldn’t apologize.

I’m not making this a race thing. One of the parties involved already did this.

In videos posted to Twitter and YouTube, the armed woman is pointing a pistol at the mom and yelling “back the f**k up!” The mom holding the camera can be heard saying to “get the license plate” and asking for the cops to be called.

The heated exchange appears to stem from when the white woman bumped into the mom’s daughter as they were entering the restaurant. After the mom asked the woman to apologize, the disagreement brewed into a shouting match before a firearm was drawn.

Two videos have been posted online, one from the mother and the other from her daughter. These videos are NSFW as they contain strong language.

I can’t say for sure what happened before the cameras started rolling, but the woman doesn’t seem to be racist in the slightest.

“This is not that type of world. White people aren’t racist. No one’s racist. I care about you, I care about you and I’m sorry if you had an incident that has made someone made you feel like that,” said the woman from the car. “No one is racist.”

In the end, the woman gets in the van and the man starts to back up, when the other woman gets behind the van and hits the window, accusing them of trying to hit her.

That’s where things get crazy. The woman in the car then gets out and has a gun in her hand, and points it at the woman.

We’re discussing this incident, and two others, on our live show tonight at 9 p.m. EST.

Until then, what are your thoughts? Was this woman justified in drawing her firearm?

Previous article: One Of The Worst 'DGU' Videos You'll See: "I’m a Democrat. I can shoot you because Democrats get away with everything." Next article: CCX2 S01E19: Justified Force? Taking A Look At A Few Recent Incidents