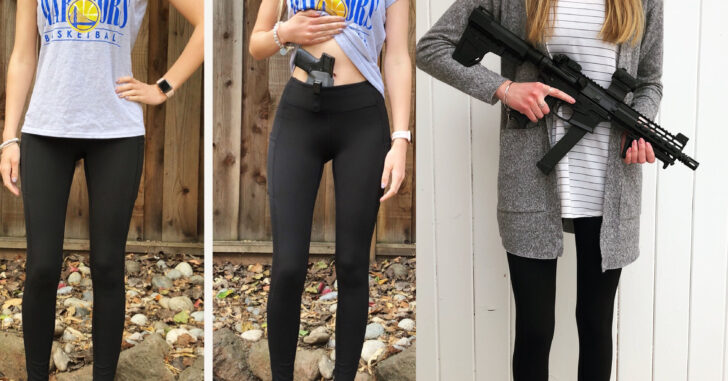 As a female who was born and raised in the San Francisco Bay Area, firearms were not part of my upbringing. Now, at 19 years old, firearms are a huge part of my life.

I was introduced to firearms when I was 17 by a family friend who was interested in pursuing a career in law enforcement. He took me to one of the few ranges in the area and patiently taught me the basics of shooting a handgun and a rifle. I was pretty nervous at first, with my biggest fear being that I would not be able to handle the recoil. The first gun I shot was a Glock 19. I thought the Glock 19 was a great size to start out with because it was small enough to fit my hands well, but not so small that the recoil was difficult to manage. We moved on to an AR15, and by the end of the day, I was hooked. 2 months later, I was in the process of purchasing a M&P 15 as an 18th birthday gift to myself. Since I was still in high school and living with my parents at the time, it took a lot of convincing for my parents to allow a rifle into their home. It was especially difficult to convince my mother.

Like the typical Silicon Valley teenager, I went to a very liberal high school. In fact, the day after the 2016 presidential election, the principal made an announcement that our school would have counselors available for any students having a difficult time dealing with the results of the election. Because of the culture at my high school, I was afraid my peers would view me in a negative way because I was a gun owner. I initially didn’t even tell my closest friends that I was buying a gun. During the last couple months of high school, I became more comfortable with my peers and teachers knowing that I was a gun owner. I wrote my civics papers about firearm laws and did my physics project about firearm recoil. At one point, I decided to post a photo on my Instagram of me shooting my AR. A male student from my school was quick to comment, writing “I fear you more now”. I first thought of the comment as funny, but the more I thought about it, it irritated me. Since I am a strong willed young woman with a gun, I am someone to be feared?

How much hate will I get for being a Warriors fan? Carrying the M&P Shield in a custom Multi Holsters appendix holster with an Ulticlip, which works great with my Lululemon leggings • • • #concealedcarry #ccw #edc #girlswhocarry #girlswhoshoot #guns #gungirl #smithandwesson #mpshield #9mm #multiholsters #ulticlip #2a

I now go to college in Utah where individuals can obtain provisional concealed carry permits at 18. I got my permit a couple months after starting school and began to learn how to dress in a way that would conceal my gun. I started my Instagram account, @freedom.concealed, about a month after I started carrying. I created my page because I wanted to share concealment ideas with other women and because I wanted to show that there are college aged women out there who support the second amendment. I am definitely not an expert on firearms or concealed carry, but I am learning more each day. With concealed carry specifically, I have overcome unique challenges. The next article in my series will focus on the concealed carry aspect of Freedom Concealed.

Previous article: North Carolina Bill Looks to Force California-Style Gun Control on State Next article: A Bullet Inside a Shotgun Shell: The Perfect Defense Round? The Worst?