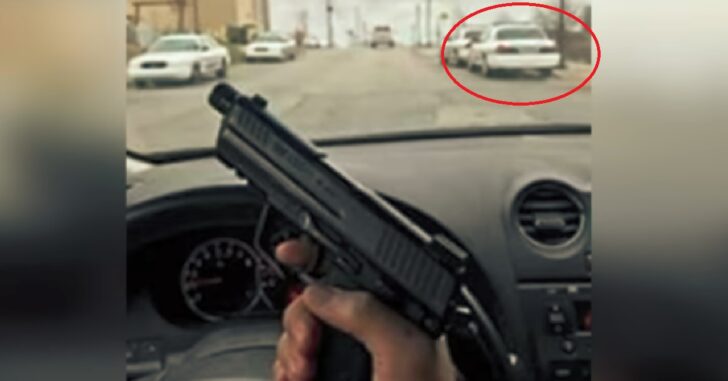 LAUREL COUNTY, KY — One social media poster caused major waves in his community when he used handguns to try to install fear in the hearts of law-abiding citizens.

The man, Kyle Childress, posted photos to social media wherein he carried a pistol and included police cars in the frame, seemingly communicating a threat to the force.

I can’t blame them for being ticked.

Kentucky State Police have made an arrest after photos posted to social media showing a driver displaying a handgun behind the wheel with a state police cars visible outside the vehicle. Police say 28-year-old Kyle D. Childress of Barbourville was taken into custody Friday afternoon following a 2-week-long investigation. Authorities began to look for a suspect after two postings were made to Facebook. Police had said the photos were posted to a “bogus” account.

Police declined to say exactly how they tied Childress to the case but said the case proceeded quickly after the photos were disseminated by media outlets. Childress is charged with second-degree disorderly conduct in the case.

Take a look at the video below:

Those are some pretty menacing photos, which has brought up an interesting thought among some viewers.

Although I think I’m with the majority of readers here when I say the freedom of speech is one of the most treasured rights the second amendment was written to protect, this decidedly toes a line.

You’re welcome to express your opinions (however asinine they may be) whenever you want, even if they’re anti-police. However, there’s a profound difference between that and what we see here, which is a blatant threat of violence against law enforcement officers.

Clearly, Childress is deeply disturbed. Hopefully this apprehension will give him opportunity to get the help he clearly deserves.

Previous article: *GRAPHIC* Amazing Video From Brazil Shows Us How To Correctly Deal With An Armed Threat Next article: BREAKING: Armed Citizen Shoots And Kills Gunman Who Opened Fire Inside Oklahoma Restaurant