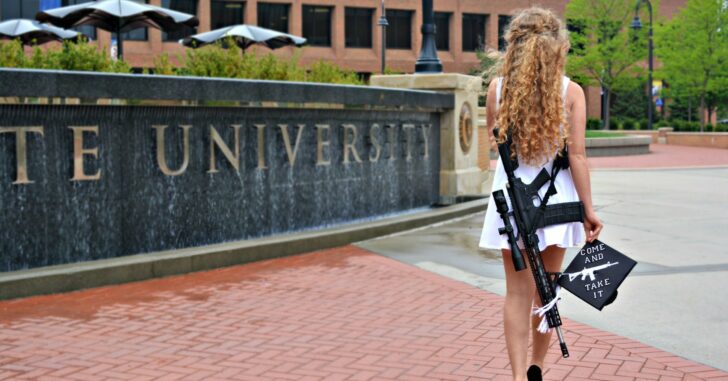 Freshly graduating from Kent State University, Kaitlin Bennett went to campus for a photo shoot with her cap and AR-10. Policy dictates that a student cannot carry a firearm on campus but after they are no longer a student, like a graduate, they are free to carry on campus.

In any event, Bennett took the opportunity to show the world how it’s done. Prior to the photos being taken, she alerted the school about her intentions.

Now that I graduated from @KentState, I can finally arm myself on campus. I should have been able to do so as a student- especially since 4 unarmed students were shot and killed by the government on this campus. #CampusCarryNow pic.twitter.com/a91fQH44cq

Eric Mansfield, university spokesperson, told Fox 8 News that once Bennett graduated she was “no longer restricted under the policy as a student.”

He also said that all guns are banned at Dix Stadium and that Bennett notified the university of her intent to have the photos taken. Mansfield said they were taken Sunday, the day after graduation.

In a statement to Fox 8 News, Mansfield said:

“Kent State University was recently ranked the safest big college campus in Ohio and 25th safest in the country, according to the National Council for Home Safety and Security. The university has a full-time, certified police force of more than 30 sworn officers who protect the campus. These officers are visible, well-trained and on duty 24/7 in support of students, staff and faculty.”

There was some backlash, as you can imagine, but that didn’t change the opinion of Bennett. She stuck to her *cough* guns*cough* and said that she wasn’t sorry for the decision she made.

I have no apologies for my graduation photos. As a woman, I refuse to be a victim & the second amendment ensures that I don’t have to be. pic.twitter.com/5CKmQobrMb

According to Bennett, she’s received numerous death threats and other hateful messages since the photos went viral. Her response?

Thanks to all who have sent me death threats for taking a picture. You’re the biggest advocates for gun rights. You proved exactly why people carry.

Since then, she’s been on TV and probably a lot of other forms of media, as everyone wants to know about Bennett and her firearm on campus.