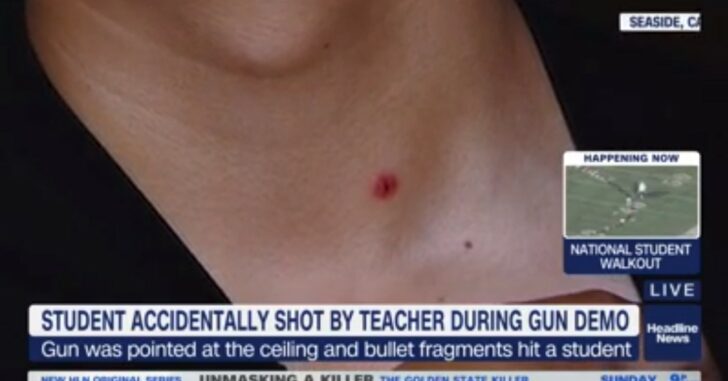 In a type of event that we rarely see, a teacher who was giving a safety lesson had a negligent discharge after he pointed his firearm at the ceiling. As our Irresponsible Gun Owner of the Day, he earns the position with flying colors.

Dennis Alexander, who is Seaside City’s mayor pro tem and a reserve officer with the Sand City Police Department, was teaching a lesson at Seaside High School in Seaside when he pointed his gun into the ceiling and accidentally fired it, said Abdul Pridgen, the city’s police chief.

Alexander was teaching a public safety class to a group of students. One of those students, a 17-year-old, was injured with either a bullet fragment or from something that fell from the ceiling after it was shot.

Either way, Alexander showed just how irresponsible he can be with a firearm, even though he’s a reserve officer with the police department.

Now, of course, talk surrounds this incident which is being coupled with the hot debate of having armed teachers inside our schools.

It’s interesting to note that we do not hear about these types of things happening but when arming teachers is the debate, these types of stories make headlines.

“I think a lot of questions on parents’ minds are, why a teacher would be pointing a loaded firearm at the ceiling in front of students,” Superintendent PK Diffenbaugh told CNN affiliate KSBW. “Clearly, in this incident, protocols were not followed.”

While it’s not clear what exactly Alexander was teaching, it is clear that he doesn’t understand and follow the 4 rules of firearm safety. If he had, like anyone else, nothing negative would have come of this.

So, here we have a perfect example of something that can add fuel to the fire for those who are against arming teachers.

The student’s father, Fermin Gonzales, said he understands that it was an accident but said that “somebody could have died.”

“I was kinda leaning toward having armed people in school in case something happened. After today, I get why people say there should be no guns in schools,” Gonzales said.

“If there’s an accident — people could die. If it’s just one, that’s more than enough,” he added.

One step forward, one step back.

As gun owners, it is our responsibility to be safe with our firearms. This is something that is non-negotiable. If you can’t do that, well, it’s time to reevaluate your capabilities. There is no room for error.