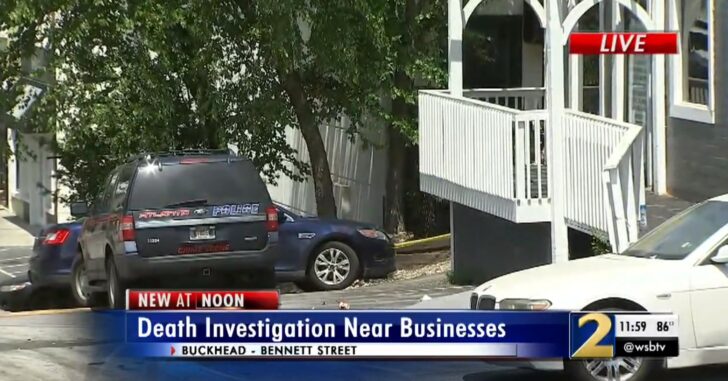 ATLANTA, GEORGIA — A man suspected of breaking into multiple vehicles and at least one business was found dead near his running vehicle after being shot by an armed person inside a business that he tried getting into.

Investigators found the man lying outside a car at the Bennett Street Shopping Center near the intersection of Peachtree Road and Bennett Street around 8:30 a.m. Monday. He was wearing a black hoodie, gray sweatpants and black gloves.

29-year-old Mohamed Akel was identified by police as the suspect.

Three other people were said to be with Akel during the incidents.

After Akel was shot by someone inside a business that he tried getting into, he went back to his vehicle in an attempt to flee. He didn’t make it far, crashing into a small deck.

When police arrived, the vehicle was still running and in park. They believe that someone had put the vehicle in park, and that it had been in drive for a while, since the tires left substantial rubber marks in the location it was found.

After Akel hit the small deck, he apparently got out of the vehicle and landed on the ground, where he died.

A firearm was also found inside the vehicle.

This is a story of numerous victims of a crime, and that crime spree didn’t stop until the suspect was met with armed resistance. I’m not cheering for the death of Akel, because it’s a sad day when anyone looses their life, but it does signal the end of that crime spree that could have seen an innocent person hurt or killed.

Previous article: In the Hunt - 01 - Legend Of Garfield Next article: [WATCH] Intense Stand-off Between Police And Man With Knife, Initial Shots Don't Stop Him