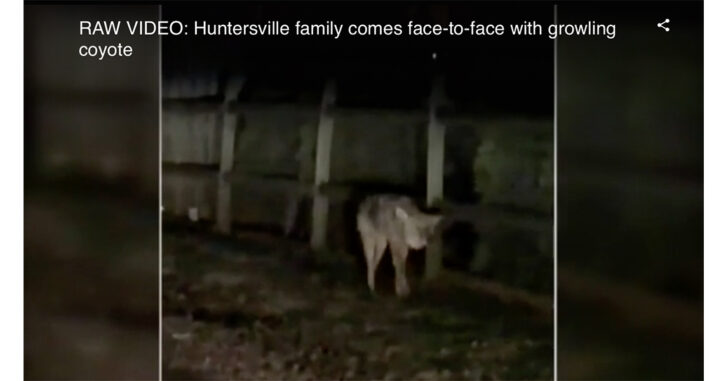 ORANGE COUNTY, NC — Coyotes are increasingly becoming a problem as metro areas expand, bringing with them pets, garbage and other potential food sources. It’s happening nation-wide with the critters being seen — and attacking people and eating family friends — from Boston to Austin to the Twin Cities to LA to Seattle.

Keep in mind that the these predators are smaller versions of their cousins, the grey wolf. They can be aggressive and sometimes hunt in packs. Former Governor Rick Perry famously dispatched a coyote with a pistol when he was attacked on his daily run. So they’re nothing to trifle with.

Ian Vigus of North Carolina certainly took the situation seriously when he heard his dog barking and saw a coyote approaching not only Fido, but his six-year-old daughter as well.

Vigus said his dog was spooked by a coyote, so he took both the dog and his daughter inside and grabbed his rifle. “As he started to lope off, I shot him and killed him,” Vigus said. “I just wanted to protect my family and protect my livestock.”

Orange County officials said there have been several recent reports of coyotes in the area.

We don’t know for sure, but we’d bet the rifle Mr. Vigus went for was an AR. Anti-gunners love to say that no one needs an “assault rifle.” That no one hunts with them. Never mind that “need” has nothing to do with it. Never mind that tens of thousands of varmint and hog hunters use them every single day.

They mindlessly spout talking points like ‘they’re only good for killing people.’ Plenty of home- and land-owners — people who have defended themselves against both two-legged and four-legged predators — know the utility of AR pattern rifles and are glad to have them when the situation calls for one.

Previous article: FL Gunman: FBI Was Tipped Just Weeks Before Mass Shooting Next article: What to Put in Your Range Bag: the Basics