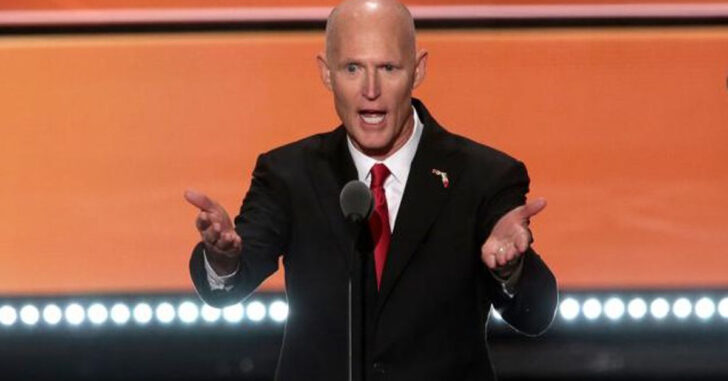 Florida Governor Rick Scott has called for the FBI director, Christopher Wray, to resign after it has come to light that the bureau did not appropriately act on an anonymous tip that came in to them.

That tip was about the gunman who killed 17 people and injured another 14 at a Florida school just days ago.

“The FBI’s failure to take action against this killer is unacceptable,” said Scott in a statement. “The FBI Director needs to resign.”

Scott’s demand comes after the FBI said Friday that it did not follow its own “protocols” in handling an anonymous tip that the suspected shooter, who was expelled from the school for disciplinary issues, could pose a danger to students.

The FBI said the tip, which raised concerns over the teenager’s gun ownership and the possibility of a school shooting, never made it to the FBI’s Miami field office.

The FBI is currently investigating what happened, and where the lapse in communication occurred.

“Seventeen innocent people are dead and acknowledging a mistake isn’t going to cut it. An apology will never bring these 17 Floridians back to life or comfort the families who are in pain,” Scott said. “The families will spend a lifetime wondering how this could happen, and an apology will never give them the answers they desperately need.”

With this teen’s history, as reported, there were numerous red flags that were displayed over what seems to be years. It’s a shame that an important tip such as this one would fall under the radar, and it shows how important it is to actually submit tips if you have any suspicions about someone’s behavior and/or comments.

Of course, this tip was not successful in stopping one of the deadliest mass shootings in US history, but it could have. It could have been the one thing that got this teen the help he needed, or a multitude of other possibilities that could have brought his plans to a halt.

Of course it’s impossible to follow up on every lead that comes into the bureau, but not sending it to the appropriate field office seems like a costly mistake. There is absolutely no way to say for sure if, had the tip been followed to the end, that this horrible incident would have been avoided. But, we can assume that it wouldn’t have hurt.