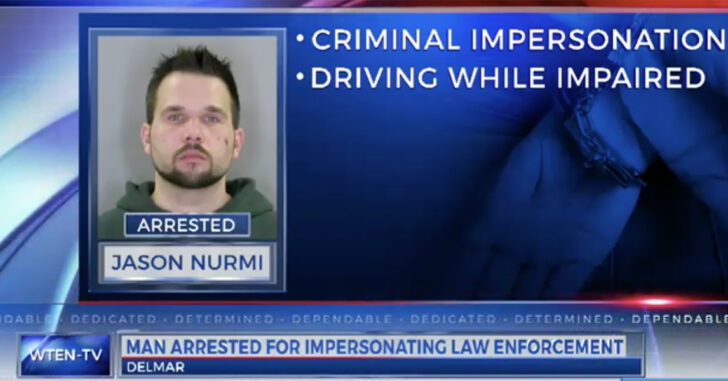 DELMAR, NY — First, let’s stipulate that concealed carriers, as a whole, are an extremely law-abiding lot. In fact they’re less likely to commit a crime than police officers, statistically speaking. That said, there are exceptions to every rule and Jason Nurmi is one of those very rare birds.

Here’s a pro tip: if you’re going to try to pass yourself off as an officer of the law, don’t try to do it to another cop.

On Saturday, at 6:41 a.m., the Bethlehem Police Department responded to a crash at Delaware Avenue and Cherry Avenue, in Delmar.  Police found a 2012 black Buick, owned by Jason Nurmi, 33, of North Greenbush.

Nurma (sic) displayed a badge to Bethlehem Police Officers and informed them that he was an investigator with the state task force.

It’s not clear with Nurmi was up to yesterday morning, but . . .

Further, the investigation showed that Nurmi was in possession of a loaded firearm and his car was equipped with flashing red and blue lights.  He was determined to be under the influence of drugs at the time of the crash.

So what we have here is crashed car, a positive drug test and lame attempt to impersonate a police officer. Not exactly a stellar representative for New York’s gun owners (let alone the rest of us). Thanks for nothing, Mr. Nurmi.