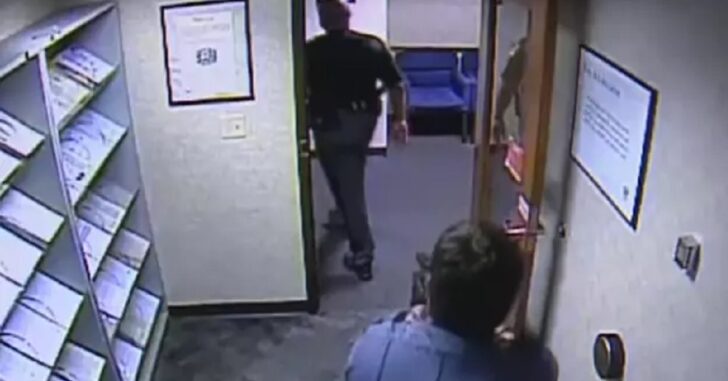 TOLEDO, OH — A sheriff’s deputy very nearly was shot by an IRS building security officer for the imagined threat he presented in entering the building in full uniform, including his sidearm, WTVG reports.

Lucas County Sheriff’s deputy Alan Gaston entered a Toledo, Ohio IRS building to follow up on a letter he received in the mail. According to WTVG, he needed a phone number to resolve whatever issue had arisen.

Gaston was on-duty at the time, and as such was in full uniform, including badge and gun.

The guard, Seth Eklund, told Gaston that he would need to leave his firearm in his car. As an on-duty, uniformed law enforcement officer, Gaston said he had to leave it on his person, and turned to leave the building.

That didn’t sit right with Eklund, for some reason. Inexplicably, he drew on Gaston, pointing his firearm at the deputy’s back with his finger reportedly very close to the trigger.

“There’s really no way to know how you’re going to act when there’s a gun pointed at you and when you think you’re going to lose your life,” recalled Gaston according to WTVG.

Gaston was followed to the elevator, where Eklund unsuccessfully attempted to take him into custody.

A video of the incident can be seen below:

Meanwhile, someone working in the office called Toledo police and claimed that there was an armed man on the premises and that he wouldn’t leave, according to Blue Lives Matter.

They didn’t bother to tell police that he was trying to get away and that he was a law enforcement officer.

Police were quickly dispatched to the area, where they deescalated the situation.

The security guard was charged with criminal menacing, like the idiot he so clearly is. Gaston was placed on medical leave by the sheriff’s department for the trauma he received. He and his wife are suing both Eklund and the security company for which he works for the lost wages and psychological damage, according to Blue Lives Matter.

Here’s hoping that they get the justice they deserve.

Previous article: Are People Actually Going To Area 51? Why It's A Bad Idea, And Why Going Armed Could Get You (Even More) Killed Next article: [FIREARM REVIEW] Naroh Arms N1