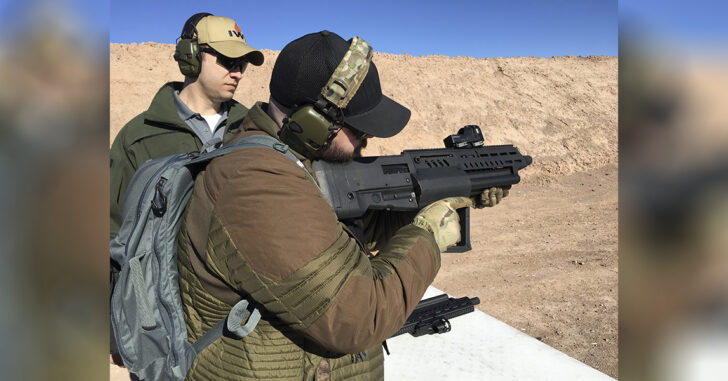 IWI isn’t the first maker of a high capacity bullpup shotgun. The Turkish UTAS UTS-15 and the Floridian Kel-Tec KSG have both been around for years and give the shooter 15 rounds of a shotgun’s fearsome deterrent capability…with varying degrees of reliability and ease of use. So when Israel’s IWI announced their new TAVOR TS12 in the run-up to this week’s SHOT Show, it drew plenty of notice. The attention paid to the TS12 was due to a combination of IWI’s well-earned reputation for building reliable, shootable firearms combined with the approach they took to the gun’s design. Unlike their competitors’ two-magazine configurations, the IWI TS12 uses three rotary magazines that hold either five 2 3/4-inch shells or four 3-inchers. The gun is fully ambidextrous. You can even load mags on both sides of the gun. Once a tube is full, you depress a small lever just forward of the trigger to release the rotating magazine assembly and bring a new empty mag up for loading. The TS12 automatically closes the bolt on a mag tube that’s loaded.

The trigger was reasonably good and recoil was more than manageable. Then again, they were feeding the TS12 light target loads at Range Day. I’m anxious to pack it with OO buck or slugs to see what the TS12 can do under actual personal defense or home protection conditions.