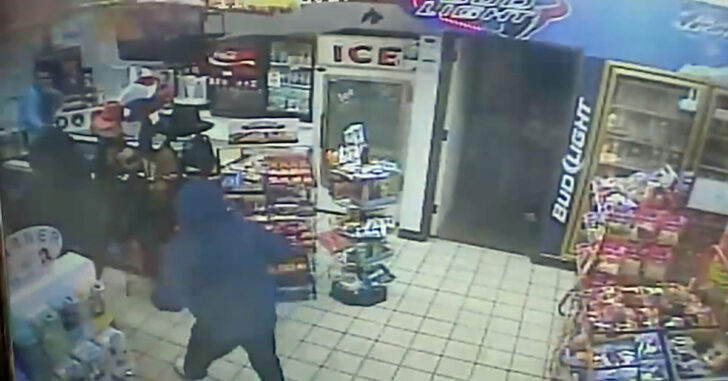 HOUSTON, TEXAS — A gas station owner is lucky to be alive after being shot multiple times in the left arm by a few armed thugs, and he was still able to return fire and survive the awful encounter.

Making coffee for customers seems like a pretty simple and safe thing to do, but store owner Mohammed Kahloon knew better. That’s why Kahloon carries a firearm at all times while he’s working, because he knows that he could need his firearm for self-defense in an instant.

And that’s exactly what happened one morning, and it was all captured on video surveillance.

While making coffee, three armed men stormed into the store. Shortly after, a gun fight ensued and Kahloon was shot as many as 8 times in his left arm. Not backing down, Kahloon was able to return fire and hit at least one of the armed thugs.

Kahloon drew his gun and fired back, according to police, striking at least one of the suspects. He drove away, but only for a block, before he crashed his car. He was dead when police arrived.

As many as three people were involved in the robbery, according to Houston police. Two vehicles entered the gas station parking lot, one following the other. Both left after the shooting.

That’s good shooting under stress and without the use of one arm, if I say so myself. We’re happy to see that Kahloon was able to defend himself and his business, but this incident brings up a good point that should be acknowledged; what if he were shot in his right arm?

Assuming that, like most people, Kahloon doesn’t have the same skills with his left arm/hand as he does with his right, could the outcome have been much worse if he were shot in his right arm? Likely, and reading this is a good reason to start practicing your shot with both hands.

Should You Practice Shooting With Your Non-Dominant Hand?

You’re a great right shot? Great! But what happens if you don’t have use of your right arm anymore? Can you rely on your left to get you out of trouble? Just a piece of information to put in your brain, and maybe start incorporating alternate-hand shooting into your schedule.