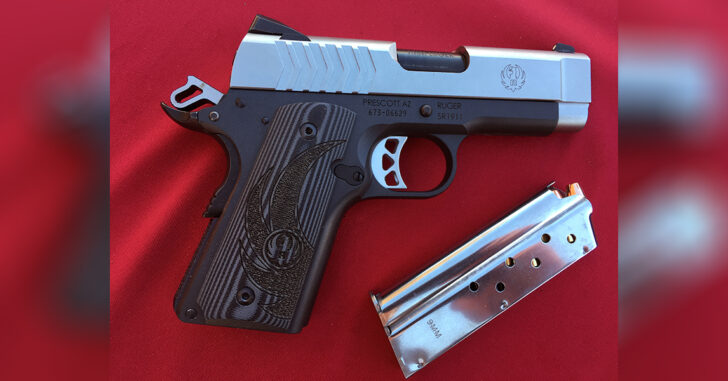 How are you celebrating John Moses Browning’s 163rd birthday today? Besides hoisting an adult beverage in his name this evening after the SHOT Show has closed down for the day, let’s take a look at one of the newest pistols his genius design has begotten.

Ruger hasn’t been in the 1911 business all that long. They introduced their first SR1911 back in 2011 and have been broadening the range ever since. Among the flurry of new product announcements that they loosed on the gun world in the run-up to shot was their latest, smallest model, the Lightweight Officer-Style 9mm SR1911.

It’s “officer-style” because technically, Colt owns the Officer name where 1911’s are concerned (though that’s abused constantly by lots of makers). Nevertheless, Ruger had their new shorty version at Range Day for us to fondle and shoot. Few guns carry as well as a 1911 and a 27-ounce aluminum alloy gun with a 3.6″ barrel will virtually disappear under cover clothing. The good news is the 9mm SR1911 shoots better than you’d expect a compact 1911 would, with far less muzzle flip than officer-sized .45 models. Which is probably the reason they chambered it in 9×19 parabellum.

This isn’t their top-of-the-line model. It’s made to be an affordable (about $750 retail) everyday carry gun. So no front strap checkering and no ambidextrous safety (which is a good thing if you intend to conceal it…and you’re right-handed).

The laser-engraved G-10 grip panels are comfortable and give you enough of a hold to control it for accurate follow-up shots. So if you’re a 1911 devotee who doesn’t have a ton of bucks to drop on an EDC gun, the “officer-style” SR1911 is worth a look.