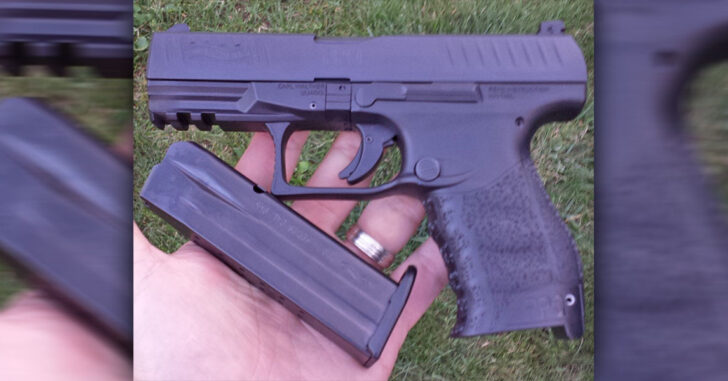 The Walther PPQ has an amazing following of people who are very loyal to Walther and especially the PPQ pistol. There are several reasons for this dedicated love for the PPQ however, I have noticed that three features stand out in which many claim make the PPQ the best polymer framed striker fired 9mm handgun on the market. First, is the light and smooth five and a half pound trigger. Second, is the ergonomics within the grip, balance and feel. Third, is the shooting accuracy and reliability.

I always knew the PPQ was a quality built handgun. I also knew that there was something special about the PPQ based on the comments from the people who follow my youtube channel. These people are many of the most experienced enthusiasts in the firearm world of which I have learned so much information throughout the years. They would remind me, quite often, that I didn’t feature a Walther PPQ and therefore I was missing the smoothest shooting handgun from my collection. Well, recently I made that change and picked up a Walther PPQ M2. It felt incredible in the hand as the ergonomics were comfortable with this well balanced handgun. The fit and finish were top quality and disassembling was a breeze. Yeah, there was no doubt the PPQ was an excellent addition to my collection.

The Walther PPQ is available in two versions, the M1 and M2. The PPQ M1 is the “classic” PPQ which offers the magazine release on the bottom of the trigger guard which is often referred to as a “paddle release” or a “European style” magazine release. This mag release style is ambidextrous and has become quite popular in the American market. The PPQ M1 model also will accept magazines from the Walther P99 which is a huge bonus for Walther fans who own both pistols. The PPQ M2 has a button magazine release which is commonly known as “American Style.” Due to the fact that the “paddle” release and the “button” release have different magazine configurations, the M1 and M2 magazines are not interchangeable. Other than that, both the PPQ M1 and M2 have the same specifications and mechanics that make this handgun outstanding. As already mentioned, the ergonomics on the PPQ are excellent. Walther uses a cross-directional grip surface to offer a comfortable and strong purchase on the gun. The grip itself is mildly textured with room for a full three finger grip that feels exceptional. Walther also offers three interchangeable backstraps to form fit various hand sizes. I have held many handguns in my life and I have to say the PPQ is among the finest grips I have ever felt. It has a quality built double stack 15 round magazine that doesn’t “beef up” the thickness of the grip. The magazine base plate fits somewhat flush to the bottom of the grip that protrudes just enough to give the pinkie finger a solid hold.

The trigger guard is squared off with serrations in the front of the guard for those who prefer to wrap their weak side finger around it. The PPQ also has a three slot 1913 rail to attach one’s favorite accessories. The slide has a tenifer matte finish that offers cocking serrations in both the rear and front. The front of the slide features the Walther logo imprinted within the serrations. I think the placement of the logo looks super cool as the serrations themselves are cut just deep enough for a solid grip when charging the pistol.

The PPQ is also left handed friendly. The slide stop is ambidextrous and the mag release button can be reversed to the opposite for left handed shooters. The white three dot sights are low profile and snag free. The large dots stand out for quick target acquisition and also works well in low light conditions. The front sight is pinned and the rear sight is adjustable for windage. There are other sight options available to install on the PPQ but for now, I am happy with the three dot sights included. Ok, now let’s get to the heart of it. The trigger on the PPQ is incredible. The Walther website measures the trigger at 5.6 pounds but my trigger scale measured just a bit over five pounds. Either way, the trigger is smooth and crisp with very little travel. Walther measures the trigger travel at .4 inches. That short travel makes this double action trigger feel like single action. The follow up shots and double taps are smooth and impressive. The trigger is quick and the reset is short. I cannot explain how many times guys mentioned that the PPQ trigger is the “Rolls Royce” of double action pistols but now after experiencing it for myself, I have to say, they were right.

Disassembly of the PPQ is simple and will require no tools. Once the gun is verified unloaded with the magazine removed, simply pull the slide back quarter of an inch and push down the takedown levers on the frame. At that point, just pull the trigger. The upper will slide off of the frame then simply remove the captured recoil spring and the four inch barrel. To reassemble, simply perform the exact same steps in reverse order with the exception of pulling the trigger.

My shooting impressions of the Walther PPQ were excellent. I went into this range session with high expectations and all of my assumptions were met. The PPQ proved to be accurate, reliable and smooth shooting. As already mentioned, the trigger action was outstanding as I really enjoyed shooting double taps with the PPQ. The short trigger travel helped me stay on target as I found the pistol to have very little movement when firing and overall it was a joy to shoot. I was able to hit my 10” target with ease at 12 yards and that was with using the gun right out of the box. The PPQ has quality written all over it and I look forward to many more range sessions with this handgun.

Overall, the Walther PPQ is impressive. It offers the qualities the people are looking for in a carry gun or for home defense. It is lightweight, compact and easy to use. Several people carry the PPQ with confidence and confirm that the size and features are superior. It offers excellent ergonomics along with very smooth shooting. If you are looking for a quality polymer framed striker fire handgun in the lower $500 range, the PPQ just may be the pistol for you. Previous article: Man Pulls Knife On Off-Duty Officer Who Saw Him Flee From Grizzly Crash Next article: Teens Violently Rob Man Trying To Sell An Xbox... He's Able To Shoot The Teen Who Shot At Him