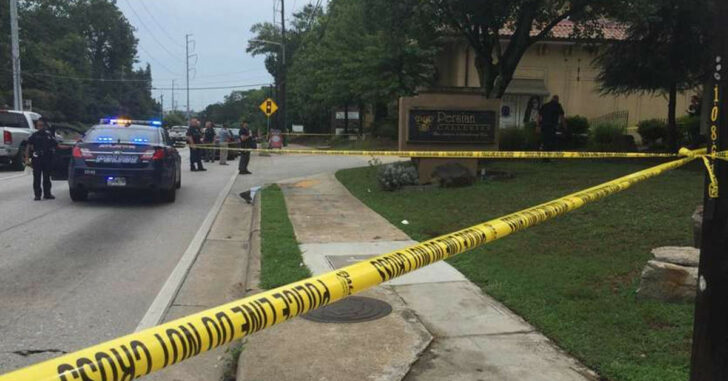 ATLANTA, GEORGIA — A very dumb criminal received several shots to his neck and throat after trying to rob a jewelry store in Buckhead. The owner of the jewelry store got suspicious when the guy came in earlier in the day claiming to want to “spend $70,000 in jewelry”. His suspicions were confirmed when the man returned and pointed a gun at him.

Unfortunately for the bad guy, the owner’s son was on standby with a handgun. As the Atlanta Journal-Constitution reports, the robber received several rounds to the neck but managed to still run across the street before dropping dead.

Witnesses to the scene spotted a woman in a getaway car parked not far from the store. Needless to say, she didn’t get out to go pick her buddy up off the ground. That should give you some idea of the dedication of hardened criminals in these sorts of situations.

They’re not worried about hurting you for what you have — and they won’t stop too long to worry about which one of them they left behind.

No honor amongst thieves, right?

It’s a cold hard reminder that anyone operating a business can be targeted for his merchandise. Even though the store may be insured, there’s the fact that a life is physically threatened. Property comes second to life and in this case, it was a great thing that the owner’s son was there to assist.

Conducting a jewelry heist can be a huge incentive for criminals but as we’ve seen — they’ll hit anywhere they think they won’t encounter resistance. Gas stations, liquor stores, restaurants… Any place there’s the potential to gain revenue, a bad guy is thinking up a way to get at it. And for those familiar with Atlanta, Buckhead is usually the nicer part of town.

Career criminals are going to be increasingly eye-balling high end shops on the good side of town because all the businesses on the poorer side have already armed up or got out. Like cancer, though, we can count on this type of activity metathesizing and spreading to otherwise more affluent areas.

It’s up to business owners to decide how they want to handle it.

Our recommendation? Carry a concealed handgun every single day. In many states, a person who owns a business is allowed to carry inside his own shop. And why not? It’s your hard work that some dumb thug is looking to lift so he can quickly lose it all.

In Buckhead, there’s one less career criminal rooting about. Let’s all take notice and act accordingly.