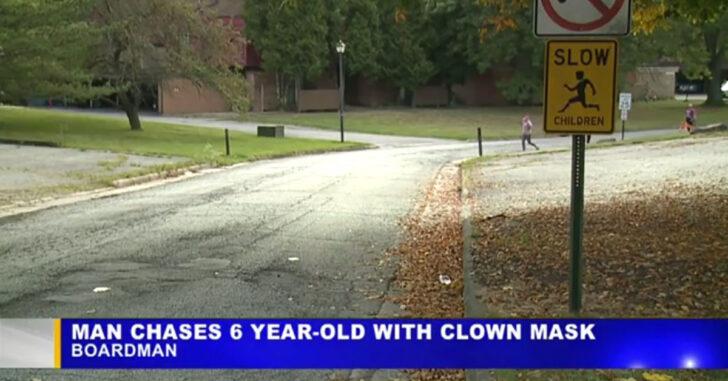 BOARDMAN, OHIO — I’ll attempt to not pass judgement while writing this article, and let you make your own. It’s going to happen, trust me. I’m not even sure where to begin, so we’ll start with a quote from a local news outlet explaining what went down that day.

Vernon Barrett Jr. wore a clown mask and chased his six-year-old daughter around the neighborhood, according to Boardman Police. The child jumped into a stranger’s car, and then ran down the street and into a stranger’s apartment. She screamed to the family that a clown was chasing her, police said. The family looked out the window and saw the girl’s father wearing the clown mask. Dion Santiago, a man at the apartment, fired a gunshot into his yard, but didn’t hit Barrett, who was still wearing clown mask, police said.

You would think that, even with the fact that this is just ridiculous, that the father would remove the mask after his 6-year-old hops into a stranger’s car. Well, that didn’t happen. I said “you would think”. Keeping up with the clown antics, Barrett is lucky he wasn’t shot by the intoxicated neighbor. Maybe it’s good that he was intoxicated because it made him miss the target. I’m kidding, because you should never shoot a gun while intoxicated. When asked why he was chasing his daughter while wearing a clown mask, he had an answer that any reasonable father would give;

Barrett said his daughter was having behavioral issues, but he decided to scare her as discipline instead of spanking because of what her mother did, the report said.

I’m not a father, and I’m not about to tell anyone how to raise their children, but this seems like a pretty failed method to me. I could be wrong, though. But I’m pretty sure I’m not. According to the report, the girl’s mother is serving jail time after breaking four of the girl’s ribs. She was charged with child endangerment, and now the father is facing the same charges, as well as a charge for inducing panic. The neighbor was charged with using weapons while intoxicated. Lets hope this child is now in a safe place.
Categories: General, Irresponsible Gun Owner

Previous article: DISCUSS: No Charges In Fatal Convenience Store Shooting, But How Clean Was It? Next article: Counselor Brings Gun To School, Everyone Freaks Out. It Never Left Her Car.