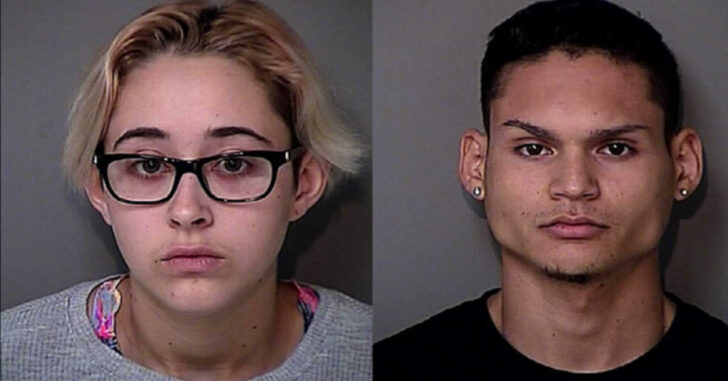 KISSIMMEE, FLORIDA — A woman is believed to have coordinated a complex armed robbery event on her ex-boyfriend, pulled off by her current boyfriend. A series of texts between Bianca Schaefer, 19, and her boyfriend, Kenneth Santiago-Morales, 18, allegedly helped police uncover at least the name of one of the robbers and certainly one of the conspirators.

According to Click Orlando, Schaefer told Santiago-Morales when to break into her ex-boyfriend’s home and where to find valuables. She then drove him to the house and waited for him to pull off the heist. Amongst the pieces of stolen property was a gun.

This is how bad guys get their hands on guns — people leave them in places where they can be easily stolen.

Police arrived to the home after an occupant of the home called police claiming armed robbers broke in. The police cordoned off the area but by the time they entered, the ex-boyfriend’s major belongings — including his gun — were all gone.

Scummy ex-girlfriend? You betcha. But the bigger problem with this whole story is how little regard this dude gave to where his firearms were located. It’s not impossible for a significant other to figure out where a gun is stored but it’s another thing entirely to leave it in a place where it can just be lifted and taken.

Granted, it may have also been in the safe that Santiago-Morales is alleged to have stolen. In which case, I don’t know what to tell you.

This is a bad situation. And it should be a reminder to those of us who may fluctuate in relationships to keep a close watch on important items like guns. When guns get lifted from a home, they get resold and distributed to bad guys. And we don’t like bad guys having guns. To stop this, it requires a great deal of personal responsibility and accountability.

Step one: if you’re not carrying it, store it in a place no one can just walk in and carry out.

Step two: get a camera surveillance system. They’re cheapish nowadays and it’s a great way to capture burglars in the act — especially when you’re not home.

Step four (when the prior three steps don’t work): Call the police and let them know that your gun was stolen. Report the serial number if you have it on file. If the police find your gun on someone else, they can use that against the bad guy. Of course, you’ll probably have to retrieve the gun through civil forfeiture proceedings.

Okay, step three may be impossible for some of us. But the first two steps are within grasp for nearly all of us.

Previous article: Fight At Home Leads To Stabbing And Self-Defense Shooting Next article: One Sheriff Irate Concealed Carriers In His State May No Longer Need A Permit