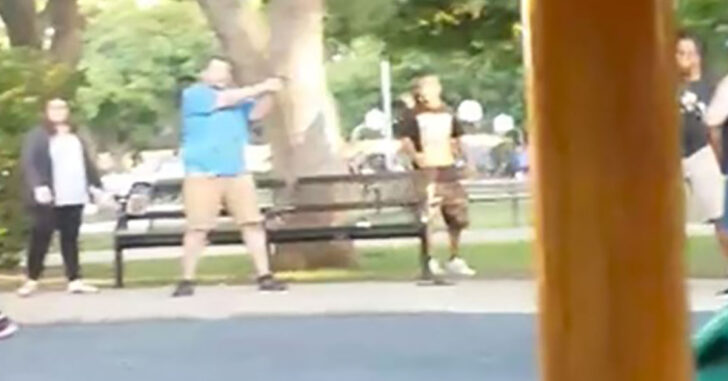 MANSFIELD, TX — A man who found himself in a physical altercation at the park drew his firearm and deescalated the situation, reports WFAA.

About five seconds of the altercation was caught on camera.

Officers were called to Rose Park on North Walnut Creek at about 7:30 p.m. Monday for reports of a man with a gun.

The 36-year-old man, who had put his gun away, was found to have a concealed handgun license. He was at the park with a woman and two children when a 30-year-old man confronted him about alleged comments he had made toward another child, police said.

The 30-year-old man became more irritated, police say, and things escalated when he hit the other man with his hand. He reportedly then ‘lifted him to his feet from a seated position by his shirt and had also struck him in the face and torso area.'”

After he was lifted up, the following footage was caught on camera by a witness.

Witnesses later confirmed that the man who approached the concealed carrier did start the altercation.

Police are trying to identify the man who approached the concealed carrier, as of May 31.

This is a tricky one — there is a something at which you have to be able to point to and say “that is why I feared for my life.” It could be a home invasion, it could be a weapon, you get the picture.

Although this guy did what he had to do, I don’t envy his position. It’s very tough.

Do you think he was justified in drawing his firearm? Please share this story on Facebook and Twitter and let us know what you think about this story!

Previous article: Is the Snub Enough Gun? Next article: THIS IS WAR: Florida Sheriff Urges Citizens To Arm Themselves To Defend Against Attacks