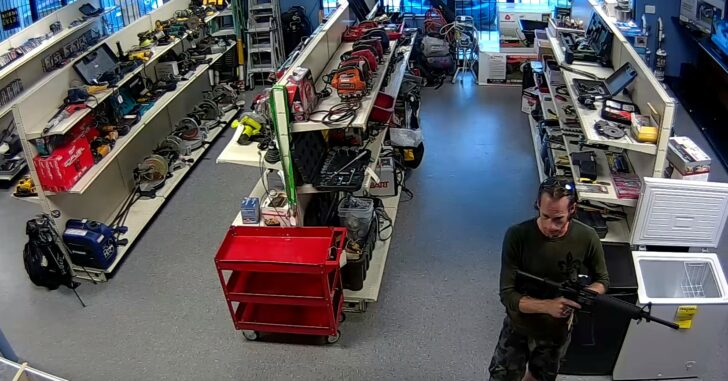 A man is in jail after walking into a pawn shop, picking up a rifle and loading it with a full magazine. He then opens fire. Of course this was a pawn shop, and employees were armed and ready to fight back. From postandcourier.com;

Gregory Franklin Westfall, 36, faces four felony counts in connection with Tuesday’s incident at Big Bucks Pawn, 113 College Park Road, according to affidavits. “The defendant planned this action out with the intent of causing social change,” the affidavits said. In all, Westfall was charged with two counts of attempted murder, and one count each of possession of a weapon during the commission of a violent crime and armed robbery, said Chief Deputy Mike Cochran, a Berkeley County Sheriff’s Office spokesman. His last known address was West Landmark Street in Boise, Idaho.

When Westfall walked into the shop, he asked to see a specific rifle. On his person, he had a loaded magazine to fit said rifle and proceeded to load it. After loading, he began to shoot at the two employees who were inside the store. At least one employee returned fire, and the police were called. When they arrived, they found Westfall nearby in the woods. He was taken into custody without any further incident, and was said to be wearing some sort of armor and he was making “several statements regarding 9/11 and that ‘the Russians’ were sending him messages.” The takeaway from this story is one that comes up on a daily basis at Concealed Nation: It’s a good day when you’re armed and prepared to defend yourself against those who look to do harm. This man is in obvious need of help, and he hope that he is able to get it. Until then, he’s been denied bail and is awaiting his future. There were no reports of injuries to anyone inside the store, and for that we are thankful.
Categories: General, News, Video

Previous article: #DIGTHERIG - Bill and the Longest Submission Ever: Glock 17, Blade-Tech Holster, and much more Next article: Here's Why You Don't Get Stupid Drunk And Enter The Wrong Home