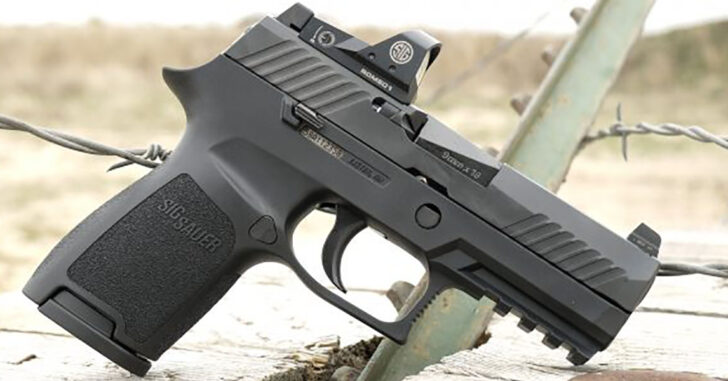 Rumors have been spreading the past week that revolve around the P320 pistols, the same ones recently adopted by the US Army as their Modular Handgun System. The rumors got so intense that the Dallas Police Department temporarily suspended their approval of officers who chose to carry P320’s on duty.

The news? That the P320’s were having drop-related incidents. In other words, the gun was firing if dropped. SIG’s response: that’s completely inaccurate and ridiculous. Take a look at their press release below.

Newington, NH (August 4, 2017) – In response to social media rumors questioning the safety of the P320 pistol, a variant of which was selected by the U.S. government as the U.S. Army’s Modular Handgun System (MHS), SIG SAUER, Inc. has full confidence in the reliability, durability and safety of its striker-fired handgun platform. There have been zero (0) reported drop-related P320 incidents in the U.S. commercial market, with hundreds of thousands of guns delivered to date.

The P320 meets and exceeds all U.S. standards for safety, including the American National Standards Institute (ANSI) and Sporting Arms and Ammunition Manufacturers’ Institute, Inc. (SAAMI), as well as rigorous testing protocols for global military and law enforcement agencies.

All SIG SAUER pistols incorporate effective mechanical safeties to ensure they only fire when the trigger is pressed. However, like any mechanical device, exposure to acute conditions (e.g. shock, vibration, heavy or repeated drops) may have a negative effect on these safety mechanisms and cause them to not work as designed. This language is common to owner’s manuals of major handgun manufacturers.

As a result, individual attempts to perform drop tests outside of professionally controlled environments should not be attempted.

“SIG SAUER is committed to producing only the finest products,” said Ron Cohen, President and CEO of SIG SAUER. “Safety and reliability have been and always will be paramount to the SIG SAUER brand.”

For more information on SIG SAUER, please visit us at sigsauer.com

SIG SAUER, Inc. is The Complete Systems Provider™, leading the industry in American innovation, ingenuity, and manufacturing. SIG SAUER® brings a dedication to superior quality, ultimate reliability, and unmatched performance that has made it the brand of choice among many of the world’s elite military, government and law enforcement units as well as responsible citizens. SIG SAUER offers a full array of products to meet any mission parameter, including handguns, rifles, ammunition, electro-optics, suppressors, ASP (Advanced Sport Pellet) airguns and training. The largest member of a worldwide business group of firearms manufacturers that includes SIG SAUER GmbH & Co. KG in Germany and Swiss Arms AG in Switzerland, SIG SAUER is an ISO 9001: 2008 certified company with more than 1,600 employees. For more information on SIG SAUER, any of its products, or the SIG SAUERAcademy®, go to sigsauer.com.