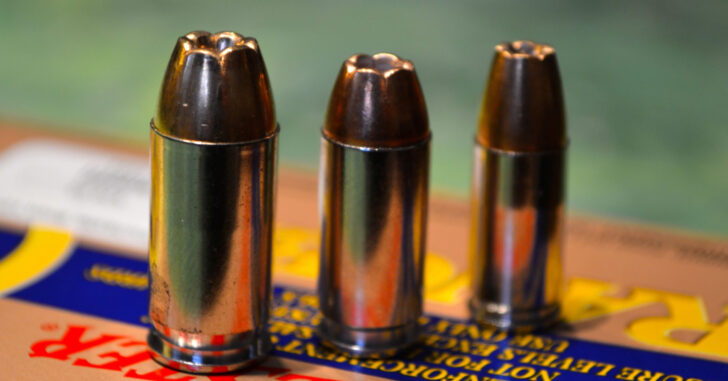 The great caliber debate is more of a myth than anything. What you shoot well with is the best caliber for you. But, now we have a whole slew of fantastic scientific evidence from the FBI ballistic labs that helps solidify and justify their recent move to the 9mm caliber.

Earlier this year is when the FBI announced their return to the 9mm after finding that 40S&W rounds were causing too much excessive wear to their firearms.

First reported by looserounds.com, this justification below is worth the read. It may change your mind once and for all, and change what you think you may know about the 9mm cartridge.

After reading below, let us know if this changes your mind about what you will carry in the future.

· Caliber debates have existed in law enforcement for decades

· 9mm Luger now offers select projectiles which are, under identical testing conditions, I outperforming most of the premium line .40 S&W and .45 Auto projectiles tested by the FBI

· The majority of FBI shooters are both FASTER in shot strings fired and more ACCURATE with shooting a 9mm Luger vs shooting a .40 S&W (similar sized weapons)

· There is little to no noticeable difference in the wound tracks between premium line law Auto enforcement projectiles from 9mm Luger through the .45 Auto

· Given contemporary bullet construction, LEO’s can field (with proper bullet selection) 9mm Lugers with all of the terminal performance potential of any other law enforcement pistol caliber with none of the disadvantages present with the “larger” calibers

Rarely in law enforcement does a topic stir a more passionate debate than the choice of handgun caliber made by a law enforcement organization. Many voice their opinions by repeating the old adage “bigger is better” while others have “heard of this one time” where a smaller caliber failed and a larger caliber “would have performed much better.” Some even subscribe to the belief that a caliber exists which will provide a “one shot stop.” It has been stated, “Decisions on ammunition selection are particularly difficult because many of the pertinent issues related to handguns and ammunition are firmly rooted in myth and folklore.” This still holds as true today as it did when originally stated 20 years ago.

Caliber, when considered alone, brings about a unique set of factors to consider such as magazine capacity for a given weapon size, ammunition availability, felt recoil, weight and cost. What is rarely discussed, but most relevant to the caliber debate is what projectile is being considered for use and its terminal performance potential.

Many so called “studies” have been performed and many analyses of statistical data have been undertaken regarding this issue. Studies simply involving shooting deaths are irrelevant since the goal of law enforcement is to stop a threat during a deadly force encounter as quickly as possible. Whether or not death occurs is of no consequence as long as the threat of death or serious injury to law enforcement personnel and innocent third parties is eliminated.

“The concept of immediate incapacitation is the only goal of any law enforcement shooting and is the underlying rationale for decisions regarding weapons, ammunition, calibers and training.”1

Studies of “stopping power” are irrelevant because no one has ever been able to define how much power, force, or kinetic energy, in and of itself, is required to effectively stop a violent and determined adversary quickly, and even the largest of handgun calibers are not capable of delivering such force. Handgun stopping power is simply a myth. Studies of so?called “one shot stops” being used as a tool to define the effectiveness of one handgun cartridge, as opposed to another, are irrelevant due to the inability to account for psychological influences and due to the lack of reporting specific shot placement.

In short, extensive studies have been done over the years to “prove” a certain cartridge is better than another by using grossly flawed methodology and or bias as a precursor to manipulating statistics. In order to have a meaningful understanding of handgun terminal ballistics, one must only deal with facts that are not in dispute within the medical community, i.e. medical realities, and those which are also generally accepted within law enforcement, i.e. tactical realities.

Shots to the Central Nervous System (CNS) at the level of the cervical spine (neck) or above, are the only means to reliably cause immediate incapacitation. In this case, any of the calibers commonly used in law enforcement, regardless of expansion, would suffice for obvious reasons. Other than shots to the CNS, the most reliable means for affecting rapid incapacitation is by placing shots to large vital organs thus causing rapid blood loss. Simply stated, shot placement is the most critical component to achieving either method of incapacitation.

Wounding factors between rifle and handgun projectiles differ greatly due to the dramatic differences in velocity, which will be discussed in more detail herein. The wounding factors, in order of importance, are as follows:

A projectile must penetrate deeply enough into the body to reach the large vital organs, namely heart, lungs, aorta, vena cava and to a lesser extent liver and spleen, in order to cause rapid blood loss. It has long been established by expert medical professionals, experienced in evaluating gunshot wounds, that this equates to a range of penetration of 12?18 inches, depending on the size of the individual and the angle of the bullet path (e.g., through arm, shoulder, etc.). With modern properly designed, expanding handgun bullets, this objective is realized, albeit more consistently with some law enforcement projectiles than others. 1 Handgun Wounding Factors and Effectiveness: Firearms Training Unit, Ballistic Research Facility, 1989.

The extent to which a projectile expands determines the diameter of the permanent cavity which, simply put, is that tissue which is in direct contact with the projectile and is therefore destroyed. Coupled with the distance of the path of the projectile (penetration), the total permanent cavity is realized. Due to the elastic nature of most human tissue and the low velocity of handgun projectiles relative to rifle projectiles, it has long been established by medical professionals, experienced in evaluating gunshot wounds, that the damage along a wound path visible at autopsy or during surgery cannot be distinguished between the common handgun calibers used in law enforcement. That is to say an operating room surgeon or Medical Examiner cannot distinguish the difference between wounds caused by .35 to .45 caliber projectiles.

Fragmentation can be defined as “projectile pieces or secondary fragments of bone which are impelled outward from the permanent cavity and may sever muscle tissues, blood vessels, etc., apart from the permanent cavity”3. Fragmentation does not reliably occur in soft tissue handgun wounds due to the low velocities of handgun bullets. When fragmentation does occur, fragments are usually found within one centimeter (.39”) of the permanent cavity.4 Due to the fact that most modern premium law enforcement ammunition now commonly uses bonded projectiles (copper jacket bonded to lead core), the likelihood of fragmentation is very low. For these reasons, wounding effects secondary to any handgun caliber bullet fragmentation are considered inconsequential. 3 Fackler, M.L., Malinowski, J.A.: “The Wound Profile: A Visual Method for Quantifying Gunshot Wound Components”, Journal of Trauma 25: 522?529, 1958. 4 Handgun Wounding Factors and Effectiveness: Firearms Training Unit, Ballistic Research Facility, 1989.

Any discussion of stopping armed adversaries with a handgun has to include the psychological state of the adversary. Psychological factors are probably the most important relative to achieving rapid incapacitation from a gunshot wound to the torso.5 First and foremost, the psychological effects of being shot can never be counted on to stop an individual from continuing conscious voluntary action. Those who do stop commonly do so because they decide to, not because they have to.

The effects of pain are often delayed due to survival patterns secondary to “fight or flight” reactions within the body, drug/alcohol influences and in the case of extreme anger or aggression, pain can simply be ignored. Those subjects who decide to stop immediately after being shot in the torso do so commonly because they know they have been shot and are afraid of injury or death, regardless of caliber, velocity, or bullet design. It should also be noted that psychological factors can be a leading cause of incapacitation failures and as such, proper shot placement, adequate penetration, and multiple shots on target cannot be over emphasized. 5 Ibid.

Shot placement is paramount and law enforcement officers on average strike an adversary with only 20 – 30 percent of the shots fired during a shooting incident. Given the reality that shot placement is paramount (and difficult to achieve given the myriad of variables present in a deadly force encounter) in obtaining effective incapacitation, the caliber used must maximize the likelihood of hitting vital organs. Typical law enforcement shootings result in only one or two solid torso hits on the adversary. This requires that any projectile which strikes the torso has as high a probability as possible of penetrating deeply enough to disrupt a vital organ.

The Ballistic Research Facility has conducted a test which compares similar sized Glock pistols in both .40 S&W and 9mm calibers, to determine if more accurate and faster hits are achievable with one versus the other. To date, the majority of the study participants have shot more quickly and more accurately with 9mm caliber Glock pistols. The 9mm provides struggling shooters the best chance of success while improving the speed and accuracy of the most skilled shooters.

While some law enforcement agencies have transitioned to larger calibers from the 9mm Luger in recent years, they do so at the expense of reduced magazine capacity, more felt recoil, and given adequate projectile selection, no discernible increase in terminal performance.

Other law enforcement organizations seem to be making the move back to 9mm Luger taking advantage of the new technologies which are being applied to 9mm Luger projectiles. These organizations are providing their armed personnel the best chance of surviving a deadly force encounter since they can expect faster and more accurate shot strings, higher magazine capacities (similar sized weapons) and all of the terminal performance which can be expected from any law enforcement caliber projectile.

Previous article: Why I Carry At Home: Homeowner Lucky He Was Able To Reach His Gun After Being Tied Up Next article: An Open Letter To Rodney McMullen, CEO Of Kroger, And The Entire Kroger Family, Regarding Shannon Watts And Moms Demand Action