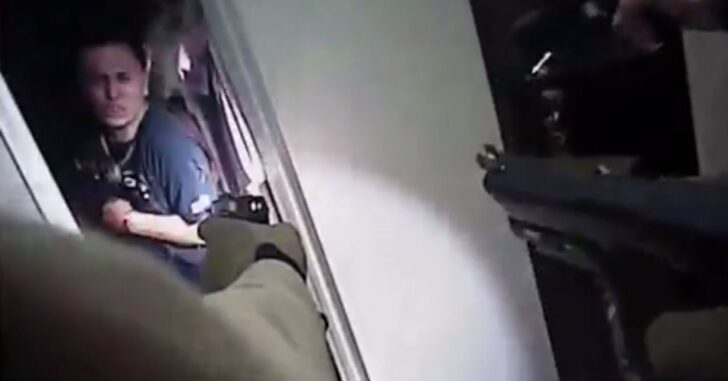 LAS VEGAS, NV — In a stunning bit of footage that has been made available to the public, police officers can be seen clearing an apartment pursuant of a domestic violence call. The Daily Mail reports that police were told that only a woman and a child were in the home, but police sensed otherwise. They decided to clear the house. While clearing the house, they encountered a man wielding a knife, 28-year-old Pedro Ramirez. What happened next was caught on camera, but serious viewer discretion is advised.

After about 20 minutes, the officers came across Ramirez in the master bedroom’s walk-in closet, crouched behind a row of hanging clothes with a kitchen knife in his hands, according to the Review-Journal.

Body camera footage shows the officers telling Ramirez to come out of the closet and drop the knife. Two of the other officers fired their tasers at the man, according to Kelly, but he did not react.

Ramirez can be seen running out of the closet with the knife held out in front of him before Prior fired three rounds into him, striking him each time.