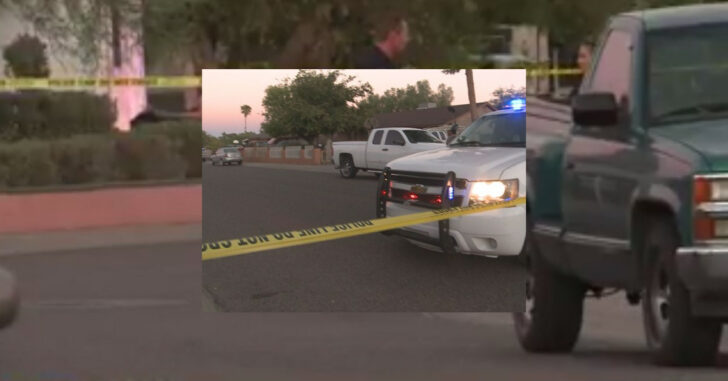 PHOENIX, ARIZONA — When an unknown bystander saw a woman and her child being run down by a truck, he took out his handgun and shot the man responsible. He didn’t hang around until police arrived and promptly left the scene. He has not been identified at this time. The man who assaulted his woman and child, however, was hit and received medical attention.

Phoenix police booked the driver after he was released from the hospital, according to KPNX 12 News.

In many states, the man who defended that woman and child may be under a great deal of scrutiny for his actions. In the State of Arizona, the rules are a bit different.

13-411. Justification; use of force in crime prevention; applicability

D. This section includes the use or threatened use of physical force or deadly physical force in a person’s home, residence, place of business, land the person owns or leases, conveyance of any kind, or any other place in this state where a person has a right to be.

Looking at Arizona law, it could appear that the man who stopped the commission of aggravated assault did so within the confines of the law.

DISCLAIMER: We’re not attorneys and we would never give legal advice on the use of deadly force. This is a call each gun owner and concealed carrier must make based upon his knowledge of applicable federal, state law, his own conscience and what he or she reasonably believes to be an imminent threat to himself, his family, and his property as allowed under applicable state and federal law.

Being a ‘Good Samaritan’ in this age is dangerous. Even if he was not charged with any criminal offense, he could still be brought up on civil charges which could effectively bankrupt him or worse.

This is why we advocate the use of force only as a last resort and to have an attorney available if you find yourself in that situation. Carry concealed everyday, everywhere. The life you save may be your own — or someone else’s.

Previous article: [VIDEO] See What Can Happen If Your Hand Is In The Wrong Spot While Firing A Revolver Next article: A-OK To Carry Concealed On Private School Campuses With Permit, AZ Attorney General Opines