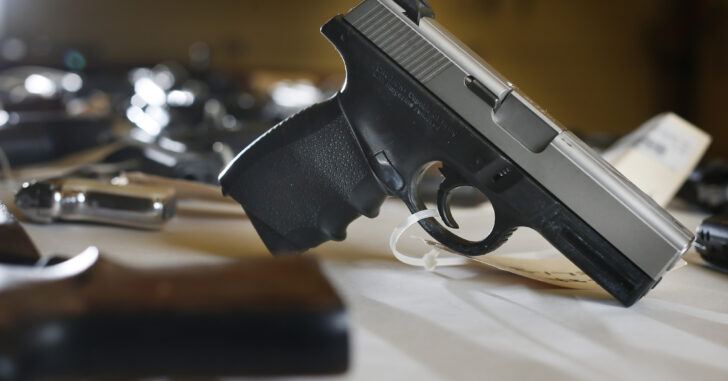 So you’re wandering around the street on a beautiful day and look down to see a pistol just laying there on the open ground. Sure, you know how to safely handle a handgun. You know to check a firearm to see if it’s loaded. But what do you do now?

Taking custody of a firearm when you do not know its origin is a potentially risky venture.

In all likelihood, there’s a good possibility someone just dropped his or her gun. Sometimes that’s because they use the wrong type of holster.

The latter option is ideal in any case where there’s little chance of someone else wandering by and picking it up.

A missing gun is important to keep track of because that’s a gun that — if left unattended — could wind up in the wrong hands.

So, for simplicity’s sake, we’ll go over the ‘ideal’ course of action and then we’ll talk about individual judgement calls that someone may have to make if he runs across an unattended gun out in public.

What You Should Do If You Find A Gun Left Unattended

If you’re at a firing range and see a gun left unattended, contact a Range Safety Officer and have him or her take custody of that firearm until the owner comes back. While nobody should ever leave a gun unattended at a range, it could potentially happen.

Scenario: Out in public

If you are out in public and encounter a gun left unattended, call the police and inform them you discovered a firearm laying on the ground. Ideally, you want them to take custody of it. You don’t want your fingerprints touching it. You don’t want to move it.

It’s not because the gun will go off. It’s not because people will automatically assume you’re some crazed maniac. The reason is much more simple: you don’t know where the gun has been or what the previous user did with it.

The police will determine all of that.

Wait by the gun until police arrive and explain the circumstances under which you discovered it. In most cases, the police will ask you some questions and then take the gun into custody. It’s their problem now. If the owner left it unattended, he can get it back from them.

If you see a gun left unattended inside someone else’s home or while on or about their property, just inform them that it’s there. Once they are made aware, it’s their problem. Again, don’t attempt to move the gun or touch it. While I personally think it’s silly to leave guns around a house in plain view and unattended, if it’s not my property and there’s no evident danger, that’s the owner’s responsibility.

Now that we’ve tackled the three places you’re most likely to encounter a gun — in very broad and general terms — let’s talk about less than ideal circumstances.

Scenario: You spot a gun laying on the ground in a place where there is a real chance of someone (i.e. kids) interacting with it OR see a gun laying in the open street where it can be repeatedly run over and hit by traffic.

For this example, we’ll use a public or municipal park during a weekend. People are out and about, running around with their families, and there are kids around. For whatever reason, you have to move it in a reasonable effort to prevent potential harm coming to anyone else.

Before you do anything, call the police. Inform them of the situation and seek their guidance prior to moving the firearm. This lets them know why you would be moving a gun that could potentially be evidence from the scene.

In that unique case, remember: treat every gun as if it is loaded.

Keep the barrel pointed in a safe direction at all times.

Keep your finger clear and off the trigger.

If you can use a handkerchief, cloth, or napkin to keep a barrier between the gun and your hand, that’s an added bonus.

Rack the slide to the rear. If a round was loaded, it will likely eject. Eject the magazine. Visually inspect the chamber to ensure no round is loaded and the barrel is always facing the ground. Keep the slide locked to the rear and magazine well clear. Do not attempt to put the gun into a bag or briefcase.

Remember: you are only moving this gun because it poses a clear and discernible risk to others if left unattended.

Move the unloaded gun to the nearest place that it is not in direct danger. Put it on the ground and wait for police to arrive. Follow their instructions once they arrive.

In conclusion, if you find a gun laying out in public, inform the police and let them handle it.

Previous article: #DIGTHERIG - EJ and his Smith & Wesson M&P Shield 9mm in a CrossBreed Holster Next article: Man Shoots Himself In The Goods While Exiting Vehicle: Why The Right Holster Matters