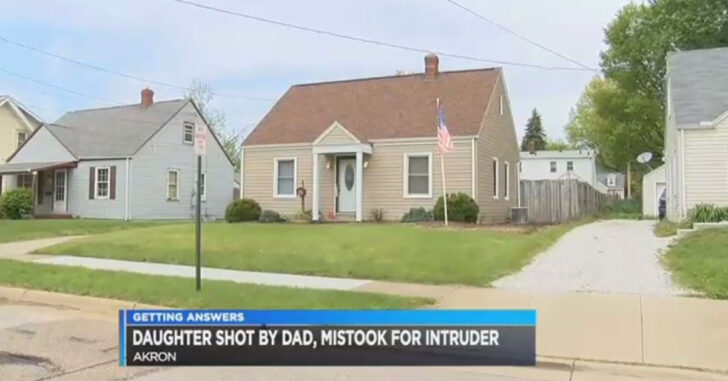 AKRON, OH — In a tragic case of mistaken identity, a concerned father shot his own 22-year-old daughter as the entered the home late at night May 11, reports WOIO.

Apparently, the father was under the impression that his adult daughter was out of the house for the evening — she was supposed to be house-sitting another residence, he thought.

For whatever reason, that’s not how things panned out.

The young woman entered the home about about 1 a.m., according to WOIO, and her father noticed that someone was entering the home. He armed himself, and went to confront whoever or whatever was out there.

He reportedly called out to whoever was in the house, asking them to identify themselves, but he did not get a response.

Understandably, the father got a little nervous.

He saw a figure in the kitchen, shrouded in the late-night dark, and assumed that the silent occupant must be an intruder.

He shot at the figure — his daughter, and wounded her in the side.

The father called 911 and ensured she got to the hospital.

Fortunately, the injury was non-life threatening, and thank goodness — the tragedy could have become so much worse.

Police Lt. Rick Edwards said there was not yet a decision made in regards to possible charges pressed, according to WOIO.

This is a sticky situation — primarily because the father here did a lot of things right.

He observed a problem, he armed himself, he demanded the intruder identify themselves, and then acted on the non-response.

And yet, he still shot his daughter.