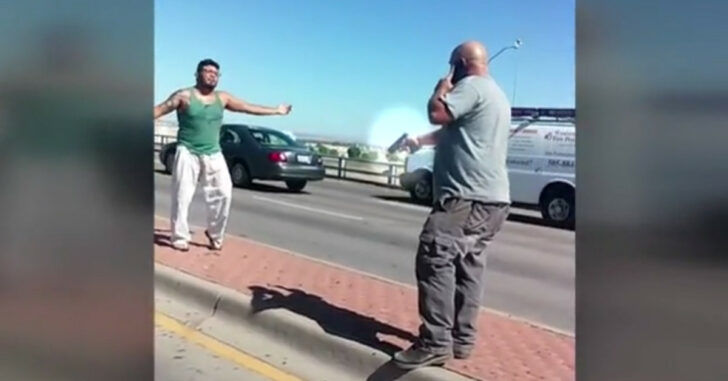 ALBUQUERQUE, NEW MEXICO — When a driver slammed into a bicyclist on the side of the freeway, he probably figured he’d get away clean from the scene of the accident. The driver still had the bicycle lodged underneath his SUV’s frame as he tried to exit the highway. That’s when an armed citizen stepped up and held him at gunpoint until police arrived.

Video released by an eye witness depicts an armed person on the phone with police while the driver allegedly pleaded for his life. The armed citizen told him he wasn’t going anywhere. Albuquerque police arrived and arrested the driver. No word on what happened to the armed citizen but he was not detained according to KRQE News.

KRQE News 13 confirmed that the driver was 33-year-old Henry Martinez. He was booked for driving under a revoked license and leaving the scene of an accident.

Ironically, after Martinez faces his charges, he’ll likely be using a bicycle to get around Albuquerque. Let’s hope nobody clips him, right?

No word on the bicyclist that was hit but he was evacuated to a nearby hospital.

Not only will Martinez be riding a bike from now on, he’ll likely be due in civil court for damages to the bicyclist and his bicycle.

Most people would see a hit-and-run and attempt to report the license plate number to the police so they can follow up with an arrest. The police will certainly arrest someone who attempts to flee the scene of the accident. However, this armed citizen wasn’t going to just sit back and wait for justice. He wanted to ensure that the driver was properly detained by Albuquerque police.

This is what we can call being pro-active. It’s not something that’s always rewarded by society but so long as the armed citizen acts responsibly (which he certainly appears to have), usually not much comes of it in terms of criminal proceedings.

In the short video depicting that scene between the armed citizen and Martinez, it’s clear he’s keeping his distance and maintaining situational awareness and good control of his muzzle. He gets on the phone immediately with police and coordinates with them.

Keeping the situation calm, keeping the confrontation to the lowest level of force necessary to fix the problem… This guy did a good job. Risky. Bold. But we’ll have to give it to him. He handled himself well.

Be safe, carry everyday, and when you can — look out for your fellow man.

NOTE: In some states, what this concerned Good Samaritan did may not be construed as well by police. Always communicate clearly with police as to what your role in the situation is and obey any lawful commands they give you. Muzzle awareness, situational awareness, and communication will go a long way to ensure you stay on the right side.

Previous article: Armed Teen Posts Pictures Of Himself With Handguns And Then Kicks Down Door Of Stranger's Apartment, Opens Fire -- Meets Deadly Resistance Next article: Private Sale Goes Awry When Robbery Suspect Uses A Taser And Ends Up In A Gunfight