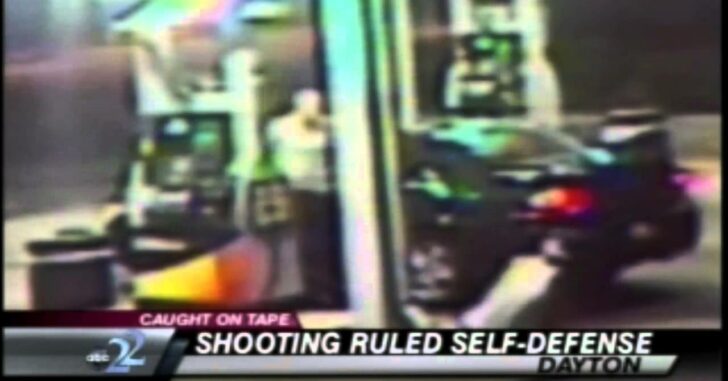 DAYTON, OH — Let’s take a trip down memory lane, shall we?

In Dayton, Ohio, a legally and responsibly armed concealed carrier shot one of two attackers who assaulted him while he was trying to pump gas at a local gas station.

This video is from 2011, but is powerful enough to warrant mentioning here and is certainly worth a mention in today’s tense society.

One of the two suspects, Brandon Turner, reportedly high on cocaine, approached the victim and badgered him for a ride.

Eventually, Turner set to assaulting the victim — there doesn’t seem to be much of a purpose behind it beyond intoxication.

After they had set in on him for some time, the victim warned them that he was armed.

The warning was summarily ignored, unsurprisingly.

The victim then stopped being a victim — he drew his firearm and shot Turner.

Police saw the shooting as a justifiable action, given the scenario and the clear video footage backing the carrier’s case.

At the time of the report, there was talk of the two attackers being charged with assault — and they better have been charged.

If this carrier had not been armed, who knows how badly he could have been hurt or what would happen to him or his property.

Previous article: Resident Exchanges Gunfire With Intruder, He Ran So Quickly That He Left His Shoes Behind Next article: Man Fires Gun Into Ground As He's Attacked By Two Dogs, Successfully Scaring Them Off