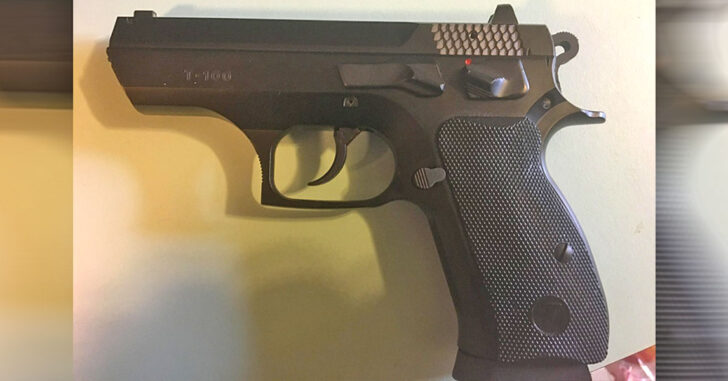 Like it does a lot of concealed carriers, it took me a long time to land on a handgun to carry consistently that I was happy with.

I initially used a Sig P320 Carry which I rarely actually carried because it was just a little too big. Some of that had to do with a rookie choice in holsters, but the fact of the matter was the grip was noticeable in the small of my back, and that just doesn’t do.

So I traded that one away and, after a series of fairly fortunate events, ended up with the Turkish Tristar T-120, the big brother of the T-100 that would become my carry piece. My first shots with the thing saw me making one big hole in the center of the target at 10 yards, and I’m no trick shooter.

I was elated, but it’s not a carry gun. It’s a mow-down-a-platoon-of-cavalry-without-reloading weapon. I wanted all the fun of the T-120 in a smaller package.

The T-100 sported a much more reasonable size without sacrificing all that much in capacity– 15+1 in a compact ain’t bad. The T-100 features a aluminum frame, steel slide, and a modest 3.7″ barrel, making it much more amenable to concealed carry.

Here are the features as listed by Tristar itself:

Worth mentioning that isn’t listed here is the firearm’s weight — it’s about 1.6 pounds unloaded, magazine in.

Oh, and did I mention that the slide rails are built right into the frame?

That’s right. This wildly-underappreciated feature makes this gun a blast (ha!) to shoot, manages recoil, and helps keep those shot groups nice and tight. I had no problem keeping holes in the 9 ring at 10 yards and, for concealed carry, I was more than happy with that. Last, and best, is the price point for this little guy. I got mine for $350 from Academy, which after tax was still well under $400.

I’ve seen them bought for as little as $279. If that’s not budget enough for you, I can’t rightly imagine what is.

The prices aren’t always that low, so keep your head on a swivel. If you snag this piece for under $400, you’re getting an incredible value for your money.

One year later, it’s still my EDC, and knowing what I do now I would have bought it for twice the price — literally.

I’m going to throw a T-100 review I really enjoy down here at the bottom for your viewing pleasure — check it out!