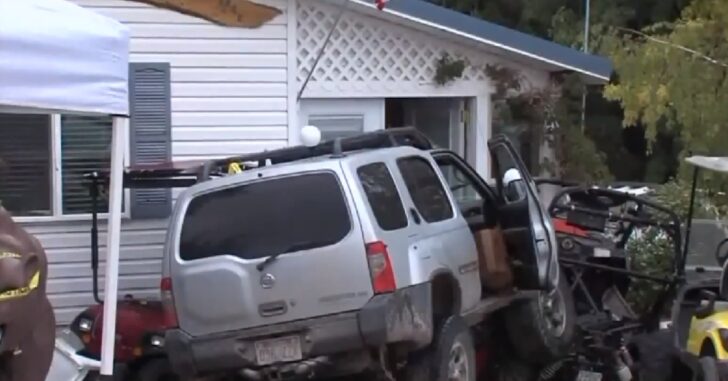 GARDEN CITY, UT — A 72-year-old woman and a 62-year-old man shot and killed what can only be described as a suicidal man who went on a rampage at their home.

The man reportedly crashed his car at their house them shot them both with a shotgun.

But that didn’t stop the pair from fighting back and winning the day.

The shooting incident occurred at Sweetwater Trailer Park around 12:30 p.m. The Rich County Sheriff’s Office received a report that a suicidal man was firing shots at homes there. The suspect then drove into a house and shot a husband and wife with a shotgun, a representative for the Sheriff’s Office said.

“During the attack, gun fire was exchanged and it is believed that is when the suspect was shot and killed,” the DPS statement said. “A preliminary investigation shows the elderly couple shot back at the suspect as a manner of self-defense.” According to DPS, officers arrived at the scene to find a deceased man inside a vehicle that had crashed into the side of a trailer home.

Investigators with the Rich County Sheriff’s Office, the Department of Public Safety’s State Bureau of Investigation, the Utah Highway Patrol and a forensic scientist with the state crime lab were called to the scene for a joint investigation. The elderly victims’ injuries are not life-threatening.

Listen, sometimes armed confrontations occur because a thug attacks you at a gas station. Sometimes it happens because you’ve got a car that they think they just gotta have.

And sometimes an assailant barrels into your house and proceeds to engage you in a gun battle.

Whenever it happens (should it ever happen, and I hope it does not), be ready.

Previous article: Store Owner Sentenced After Shooting Shoplifter In The Back Next article: Two Banks Were Robbed in My Hometown: Here's Why We All Should Be Mad