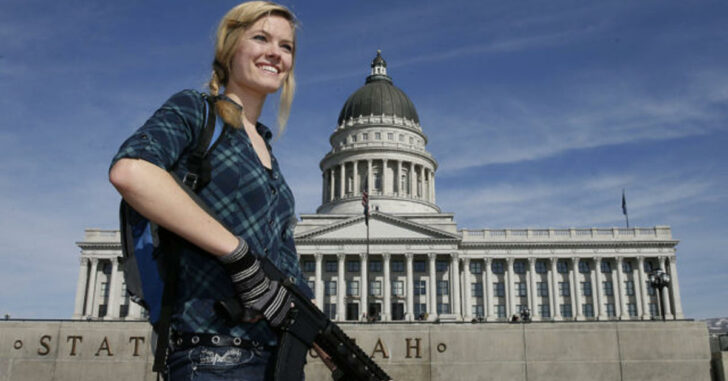 SALT LAKE CITY, UTAH — Just yesterday we reported that Utah instituted a new law which drops the BAC threshold down to 0.05 for DUI. We also found out, though, that they dropped the age requirement to pursue a concealed carry permit down to 18 years of age.

This opens up concealed carry to a whole new generation of up-and-coming law-abiding gun owners. House Bill 198 joined a number of other gun-related bills that arrived on Governor Gary Herbert’s desk, according to FOX 13 Now.

The bill also included a section to forbid the carrying of firearms onto schools but would allow for concealed carriers to go onto the campuses of publicly held universities and colleges.

The bill was aimed at giving freshmen students the opportunity to defend themselves if they become the victim of violence or sexual assault. This is a good reason to drop the age restriction. By the time a teenager graduates high school, he’s ready to either join the work force or attend an institute of higher learning to pursue a degree. In either case, with proper training, he should be able to make basic good life decisions when it comes to firearms.

It can take years for even the average concealed carrier or gun owner to become fully acquainted with his firearms and comfortable with their use. It all depends on the level of experience and exposure the person had to guns and whether or not that person was proactive in pursuing training.

There’s nothing saying an 18-year-old can’t make good decisions with his or her life. And for parents anxious to send their children off to university, this is an added piece of security that their daughter or son can carry a gun.

And, as I’ve argued plenty of times before, decisions such as this can lead to earlier exposure to firearms. Heck, men and women from across the country can join the military at the age of 17 and become exposed to firearms. Why is it such a hindrance for them to do so in the civilian world?

More responsibilities on the individual to make good decisions means more people getting used to carrying their own weight. That’s never a bad thing.

Previous article: Early Morning Heist At The Bellagio Gets Tense When Suspects Can't Start Their Car Next article: Suspect Linked With Multiple Burglaries And Car Robberies Picks The ONE House In New Jersey Guaranteed To Have An Armed Occupant