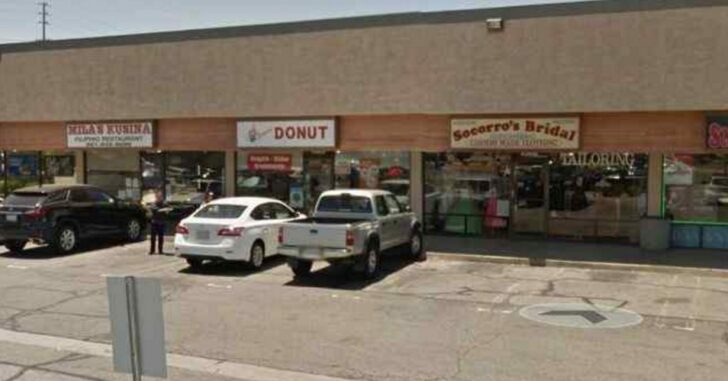 LANCASTER, PENNSYLVANIA — An armed robber lay dead after a 3 a.m. shootout involving an early morning employee and two robbers who smashed open the front window. Deputies confirm the robbers smashed the glass on the front window with intention of gaining access to the doughnut shop and robbing it.

Lancaster County Sheriff’s Office responded in record-breaking time when they got reports of a shoot-out at the local doughnut shop. They arrived on the scene to find one of the robbers mortally wounded. Lancaster Daily News confirmed the robber died at the scene but will not release his name until his next-of-kin is notified.

The employee is apparently doing fine despite some unfortunate chocolate frosting on his work clothes. The robber who escaped is likely still running, considering if he’s caught, he’ll be charged with his buddy’s death. I’d advise police to follow the trail of powdered sugar and raspberry jelly filling.

All yolks aside, this employee came to work prepared. Who the heck would ever guess armed robbers would decide a doughnut shop is a good place to burglarize at three in the morning? My guess is they never worked in an actual doughnut shop or bakery. Otherwise, they’d know employees trickle in around that time to start baking for the day.

If their plan was to hit the store while employees were inside, they got what they deserved. Otherwise, they’re just two desperate fools that simply didn’t know any better.

My third guess, and this is merely Sherlock James speaking, is that this little doughnut shop in Lancaster was secretly the Hermanos Pollos of methamphetamine distribution in the either Northeast. Walter White of the doughnut world was probably baking up his next batch of Blue Lemon Ice frosting and the robbers figured one good hit at 3 a.m. would net them several million dollars worth of glaze.

Okay, okay, I probably watched one too many episodes of The Wire.

The point of this entire story is that we have an employee who came prepared for the job regardless of whether or not he figured he’d ever need to use it. It just so happened he did. And I’m truly thankful that he came out of the situation okay. No doughnut shop baker needs that type of stress in his life.

And you just know, because it’s a local doughnut shop in Lancaster, some senior citizen showed up at his usual time of 7 a.m. and probably walked over investigators to get to his usual seat so he could have his morning cup of Joe and a chocolate glazed doughnut.