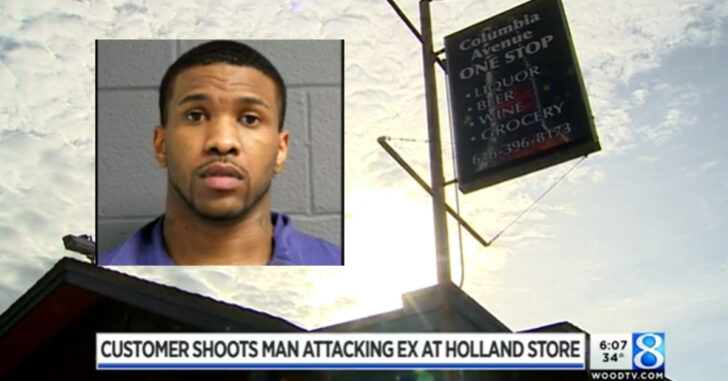 **The article title has been corrected to say that the suspect is in critical condition and not deceased.

HOLLAND, MICHIGAN — An abusive ex-boyfriend with a rap sheet a mile long shows up at the place of work of a former girlfriend and begins violently beating her. This is the sort of sad tragic thing most people would just read on the news and shake their head. However, one customer of the store saw the violence and rushed to her aid. The suspect then turned on the customer and allegedly tried to grab his gun after the customer tried to break up the assault. The customer, then, had no choice but to draw his gun and shoot the suspect twice.

Police are saying that the customer’s actions were justified. In a statement to WOODTV, Capt. Keith Mulder of the Holland Department of Public Safety described what that customer had to go through.

“He (the customer) goes into the situation having no idea what’s happening, not intending to have to use any type of force against anybody – and is surprised by an act going on. So you can definitely understand his perspective,” Mulder said.

That clerk credits the customer’s actions with potentially saving her life. If a Good Samaritan had not been able to stop 29-year-old Tramell Jackson, he may have killed her.

Jackson’s arrest record spans a history of violent acts and abuses towards others. Now, he’s in critical condition in a nearby hospital. Once he recuperates, he’ll stand trial for the assault. The licensed concealed carrier who stopped him will likely have to come in and testify.

We talk about “good guy with a gun” stories all the time. A lot of people want to call these stories myths or fake. Well, the link is right above to the news story and I encourage all my readers to check our sources and make sure they work.

The reality is that there are quite a few good people out there. And when they see someone getting violently assaulted, their natural instinct is to save a life — not take one. This concealed carrier made the call to investigate what he clearly saw was a violent disturbance. By him interceding in that conflict, he saved a life. By him defending himself against a known violent felon with outstanding warrants, he likely saved his own life as well.

The only people who lose, in situations like this, are bad guys.

Because the crime happened around 10 p.m., there’s a likely chance if a good guy with a gun hadn’t stopped by, that assault could have continued and likely escalated with no chance of anyone breaking it up. It’s a miracle that a concealed carrier happened to stop by.

And true, it’s not a concealed carrier’s job to defend anyone other than himself. There will be plenty of firearms enthusiasts who will argue that he should have stayed back and called the police. That is certainly a much safer course of action.

Some people just can’t stand by and watch a man beat another person to a severe, bloody pulp. There’s a natural instinct that wells up when you see that sort of thing take place. And there’s always a little voice in your head that asks, “what if that had been me? What if that was me getting beaten with no one willing to help?”

When we help out our fellow man or woman, we’re taking a step towards living in the type of society befitting of the liberties inalienably granted to every citizen in this country. Be safe. Don’t step into fights. But don’t be afraid to carry your handgun every single day and be willing to defend yourself. There’s a lot of thugs like Jackson out in this world and they’re not afraid to hurt anyone for any reason. We need more good guys and gals that are willing to defend themselves appropriately.