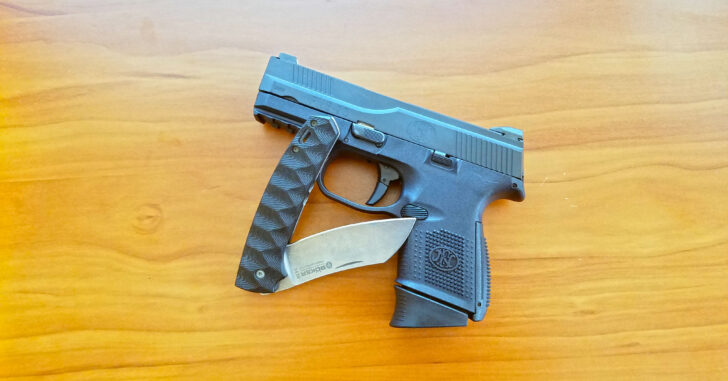 The gun and knife go together like corned beef and cabbage, but while most armed citizens carry a knife, few spend time considering the blade they carry. In this article I wish to address the role of the knife as a must have utility and rescue tool and as a defensive weapon. I would suggest that all handgun carriers invest some thought into their own needs before selecting the best blade for their own daily carry.

Let me say this from the outset: I am not a dedicated knife guy that prioritizes “knife fighting” techniques and I write this for the like individual. Most people who carry a gun as a primary defensive tool do carry a blade, but it usually factors into self-defense only as an afterthought. For myself, the knife serves a secondary role as a weapon, but it is an extremely important lifesaving tool that should be carried at all times by anyone who believes in being prepared for crisis, whether that crisis involves fighting or surviving some other unexpected emergency. However, while the knife is secondary as a weapon, the importance of the tool in this capacity is significant and there are certain situations in which the blade can make all the difference.

When I was 12 years old, I got stuck in a seat belt that would not release. Nobody in the vehicle had a blade. That was the last day I ever left the house with no cutting tool on my person. I learned this lesson the easy way. You may learn this lesson when in a car that is filling with water, or in one that is burning, or in the wake of a wreck when you can’t free your child from the car seat. Capable people carry a blade, it is that simple. Without a cutting tool on your person you are not prepared for the dangers of the world.

The cutting tool does not have to be a dedicated knife to fill the rescue role, it can be a multi tool. In fact, when in extremely restricted environments I will carry a small multi tool with a non-locking blade. Hardly a weapon, but it is still a cutting tool that will allow you to survive such a situation as referenced above. However, my approach to carrying a knife on a daily basis is to carry a blade that covers the necessary utility and rescue role combined with defensive capability. I personally carry folders as I find them more convenient. However, deploying a folder from a pocket, even if you train for it extensively, is more precarious than drawing a fixed blade knife and serious knife people often opt for the fixed blade solution. However, most gun people carry a folding knife due to legality or convenience but there is still great defensive utility with this tool even if that is not the primary purpose for carrying the knife.

For those that carry a handgun on a daily basis the most likely defensive use of a knife is going to be in a weapons retention struggle, or simply a contact distance struggle in which you can’t access the firearm. I find most people carry a folding knife on their dominant side, typically clipped to the pocket on the same side of the body as the gun. The issue here is, if your dominant hand can’t access your gun to begin with, your secondary weapon is sitting on the same side and is unlikely to be accessible either.

I realize that most people are not very ambidextrous but I suggest keeping your blade accessible to your support hand so that either hand can quickly access a weapon. This means that deploying the knife quickly and efficiently, especially a folder with the support hand, is going to demand some training and dedicated practice. I think that all of your emergency tools should receive the required practice, obviously, so if you want to be able to realistically deploy your knife in a critical situation then spend the time training for it.

If the knife factors into your defensive plan, even at a secondary level, then consistency needs to be considered. The knife should be carried in the same body location, similar to your gun, so that you will reach for it in that location naturally when under stress. I would also recommend carrying the same knife always, or at least knives that are similar in function. I always carry a particular folding knife clipped to my support hand pocket, and I have a smaller knife that functions and deploys in an identical manner that I will use when dress or environment calls for the smaller blade. This way I have a predictable and consistent force option, always in the same location, always deployed the same way.

While you may be a typical gun carrier that views the knife only as an unlikely backup option for defensive work, you need to be conscious of the legal elements and stereotypes that surround this tool when used for such purposes. Beyond just the legalities of carrying knives, which can be just as complicated as the legalities regarding the carry of firearms, an important aspect for you to consider is this: no matter how you twist it or turn it, the American judicial system typically sees the use of force with edged weapons as being felonious. While absurd, the reality remains that a lot of people have had legal trouble because they legitimately defended themselves but they used an edged weapon to do so.

I am not sharing this word of caution to make you hesitant to use a knife if that is your only means of protecting yourself. I do, however, suggest that this reality be recognized and considered and it is another reason that I believe the firearm should serve as the primary weapon whenever possible. If under circumstances in which you cannot carry a gun then certainly carry a knife if you can, but be aware of this reality. Remember that, whatever the situation may be, a blade is considered equal in lethality to a gun and they are both weapons of lethal force in the eyes of the law. Brandishing a blade is considered threatening somebody with a deadly weapon, so all legalities concerning guns apply to knives.

Spend some time considering your needs and choose your tool wisely, but be sure you always carry a blade. The knife is just as important, and perhaps more so, than any other item you carry. It serves as a devastating contact distance weapon in trained hands and, even more importantly, it is an emergency tool for which there is no substitute. However, be conscious of the legalities and consider how your knife factors into your defensive plan accordingly.

Previous article: Armed Suspect Announces Robbery, But The Store Manager Had His Own Gun And Wasn't Afraid To Use It Next article: Armed Robber Holds Occupants Hostage In Their Own Home... Until One Of Them Got A Gun