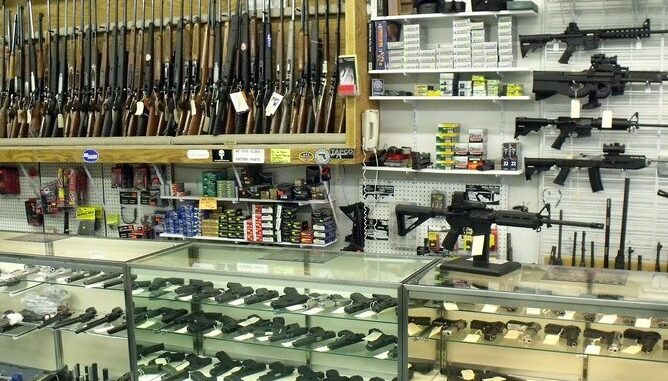 According to addictinginfo.org, a woman was recently denied the purchase of a firearm because the St. Louis Police told the gun shop to remove all of the firearms and ammunition from the store.

“Did you notice the tractor trailer back there to our loading dock?” the man [gun shop employee] asked the woman, who responded with an affirmative. “All the guns are already packed in, and we’re taking all the pawns out of here too, just to protect our customers’ merchandise.”

“They’ve been saying that they’re gonna target gun stores and pawn shops,” the clerk told the woman. “This came from law enforcement; it’s what they told us. They sent out memos and everything.”

A picture was snapped of a hand-written sign that is supposedly from the same gun shop. In case you can’t read the blurry picture; “Per law enforcement, all firearms have been temporarily removed from the premises.”

If true, the ‘orders’ were likely given so that when violent protests begin after the grand jury decision is made public, looters and protesters aren’t able to break into gun shops to get their hands on firearms and ammo. It also hinders the law-abiding to make last minute purchases to protect themselves, like this woman who was turned away.

As TTAG stated, this doesn’t really prove that the grand jury is going to come back with the decision not to charge Officer Wilson. Many, unfortunately, believe that protesters will turn violent regardless of the outcome.

I really hate to say it, but things do not look good in the Ferguson area, and we will likely see some rather intense violence in the weeks ahead.