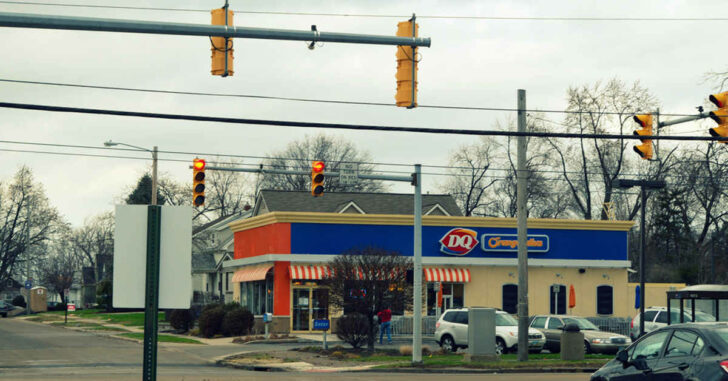 MAYFIELD HEIGHTS, OHIO — An armed robber was found a few blocks away from a Dairy Queen after getting shot by one of its employees. Police say that the robber pointed a gun at employees around 10:20 p.m. One of the employees was a concealed carrier.

According to FOX 8 News Cleveland, the concealed carrier fired one shot at the armed robber before the suspect fled on foot. Police tracked him down a few blocks away and got him treated for a non-life-threatening gunshot wound.

The concealed carrier had a permit, complied with police, and was not taken into custody. The event will still be investigated by police but it appears to be a clear-cut case of self-defense.

Closing up at the local Dairy Queen shouldn’t be that stressful. There’s quite a few Americans who likely remember a time when the thought of a Dairy Queen stand getting robbed would be a pure act of imagination or fiction. Now, it’s just another “soft target” for armed robbers with no experience, no brains, and likely a stolen gun.

How the heck do we get back to a society where dumb acts of violent crime don’t seem so common place?

The only real answer to that is to make that choice much more dangerous. If a young man with a stolen gun and double-digits IQ wants to endanger your life and those around you, you have to fight back.

I’m sorry if you were hoping for a better answer or a less violent answer. It doesn’t exist. When the collective IQ of your criminal pool drops while the population of that criminal pool increases, the average person is left in a real bad place. Either you fight back or you wait to be a victim.

Now, there’s a likely chance you, as an individual, will never encounter the type of situation where you need to draw your concealed carry handgun to fight. But ask yourself: are you willing to risk your life on that bet?

Most concealed carriers have made that answer, loud and clear: No. We will not be victims.

Previous article: Active Shooter at Texas Hospital turns up No Shooter and No Victims Next article: Intruder, Armed with Knife and Electric Drill, is Shot by Homeowner