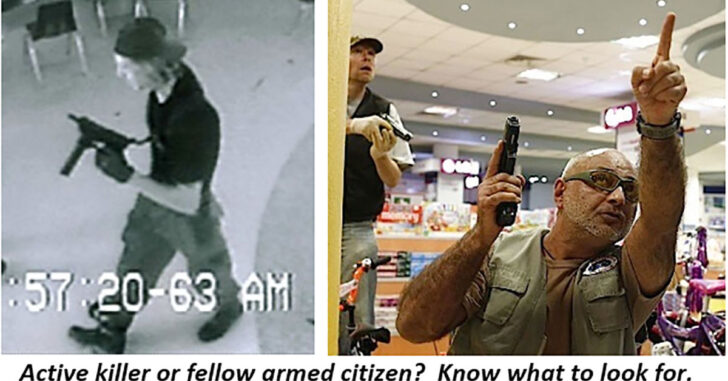 Mass attacks grab the headlines. A lone sicko mad at the world, a racist who wants to start a race war, a jihadi terrorist, take your pick. They all seek a similar goal: a high body count. We also know from experience the best way to resolve such issues is to cut the mass killer down with fast and accurate gunfire at the beginning of the rampage. Of course, these monsters almost exclusively attack liberal utopias gun-free zones to avoid such contingencies. Notice I refer to active killers rather than “active shooters” and that is because these nut jobs tend to use more than just firearms. Knife attacks, vehicle attacks, and explosives have all been used and there are, unfortunately, going to be more such attacks. Anyway, what are some considerations for the average concealed carrier in this age of terror and mass murderers?

Modern tactics suggest training to make head shots more often than has been the doctrine in the past, training to make “anchoring” shots to make sure that a terrorist is truly out of the fight, and the like. These are considerations for this rare yet exceedingly bad scenario. Here, though, I wish to tackle a few topics specifically geared towards the concealed carrier that have not been brought up as often. Before proceeding, let me say that the average concealed carrier is still far more likely to get into a fight with a crackhead in a parking lot than with terrorists or other active killers. However, the active killer threat, although still relatively uncommon, is bad news and demands some different skills and tactics to resolve.

I think it is worth spending more time focusing on further shots and enhanced accuracy than most concealed carriers do. I say this based on the fact that such incidents stopped by armed resistors have often entailed longer range shots than typical violent encounters. Can you make head shots at 25 yards? Many active killers have worn body armor and/or explosive vests. If you suspect either you need to go for head shots to neutralize and to not detonate explosives. Also consider the gun you carry. Small guns are necessary for certain circumstances or dress and they are far better than no gun, but the commitment to carrying a more formidable handgun when you can do so is worth the effort this day and age. Now, let us address two considerations that may prove the most pressing for concealed carriers in such a situation:

Consideration 1: Don’t Get Killed by Friendlies

One topic pertaining to active killer situations that does get discussed fairly extensively is not getting killed by responding police officers. This is indeed a valid concern as any officers responding to calls for an active killer in a public location will be rolling in hot looking for, you guessed it, a guy holding a gun. A second concern which is discussed less, however, is not getting killed by a fellow armed citizen. I will remind the reader that, at the time of this writing there are over 14 million concealed carry permits issued in the United States. If in a crowded location where you are carrying your gun don’t you suppose there is likely to be another citizen carrying a gun? There may be many other citizens carrying guns. That may insure a short rampage for the killer, but it may pose a hazard to yourself. After all, during a mass attack other armed citizens will be looking for, you guessed it, a guy holding a gun.

There are many tactics that are suggested to deal with this including holding your gun in position Sul and covering it with your support hand so that it is obscured from the sight of potential friendly fire. There is also the discussion of getting your gun back in the holster before police officers arrive. One thing I don’t see discussed very often, however, is my advice: don’t take your gun out unless you make contact with the killer. Now, before the gnashing of teeth begins, I am not suggesting not taking your gun out if you actually see the killer and can shoot, but in many of these circumstances most are aware of the situation initially only by the sound of distant gunfire. If you are in the mall, an office building, or any such location, if you hear gunfire but see no immediate threat, don’t take your gun out. Get your bearings on what is happening, identify where the danger is coming from, and determine your course of action.

What you decide to do is, of course, dependent on the situation. Are you in a public place with your family? Obviously, for most of us, the safety of our loved ones is first priority and if we can simply get them out of the building to safety that is what most of us would do. However, if by yourself, armed, and trained to the point of confidence, you may decide to move towards the gunfire to protect innocent life. In such an event I do not see the feasibility of drawing your gun and running into a crowd of people who are stampeding past you to go confront the threat with gun in hand. You are going to be a target for any other armed citizen or LEO present. The gun needs to stay concealed until it is go-time. If you encounter the killer the gun needs to come out fast and the problem needs to be neutralized fast, and the gun needs to be re-holstered.

This consideration is important and is not discussed very often. While we don’t want to be killed by friendlies, be they LEO or other armed citizens, we certainly don’t want to kill a friendly either. After all, you are going to be looking for, you guessed it, a guy holding a gun. What if that guy with a gun in his hand is another armed citizen like yourself? Maybe one who did not consider the suggestions in this article and decided to run around with a gun in his hand instead of keeping it in the holster until go-time. How do we know what we are looking at? We need to interpret what we are seeing. How does an active killer look?

Before proceeding, take a look at these two pictures. On the left is a capture of Derek Klebold, one of the two Columbine High School killers. The other image is a picture of armed citizens present at the Westgate Mall terror attack in Kenya. Do you see the differences? The reality is very few, even among experienced law enforcement officials, have dealt directly with active killer events so there are few who have seen it firsthand. Most of us have not seen it directly and hopefully that will remain the case. So how do we know what to look for? Well, one of the benefits of modern technology such as surveillance cameras everywhere in combination with video internet sites like YouTube and Live Leak is the fact that we can indeed see what it looks like. Do the research. You will notice a trend in which these guys move in a hunter-killer manner. Often the weapon is held high and the eyes of the killer scan low, looking for victims who are cowering under furniture or laying prostrate on the floor waiting to be executed. It is the body language of an invulnerable hunter slaughtering helpless prey. Sometimes cool and calculated, such as what we saw transpire at Columbine. Sometimes hurried and frenzied, such as what we saw in the Washington Mall terrorist attack. Learn this posture.

Another consideration is the kind of weapon the gunman is holding. A long gun is an obvious indication that we are probably not looking at an armed citizen. This alone is not absolute proof that you are looking at the killer, but it is serious evidence. Hence a reason that running into the crime scene with your “trunk gun” is not a good idea in such circumstances. The long gun is also a significantly more dangerous threat to you than a handgun. Approach with appropriate tactics and if you have confirmed that you are dealing with the killer taking him out from behind cover and before he sees you is the suggested strategy.

The most obvious indication that you are looking at the killer will be, of course, if you see him killing innocents. One thing of note: an active killer is a different situation than many typical criminal actors. If you know that you are looking at the killer and he has not yet seen you, you are not obligated to announce yourself or to make verbal challenges commanding him to drop the gun. You need to make sure that it is indeed the killer, but if you know it is, there is only one course of reasonable action and that is neutralization through gunfire. Shooting active killers and terrorists in the midst of a rampage in the back is also permissible, unlike shooting a fleeing mugger. This is a known active threat that will continue to kill innocents unless stopped.

In contrast to the killer profile, how may a plain-cloths good guy appear? He is going to appear different. A guy who is trying to stay behind cover peering around an object towards the suspected direction of danger is probably not the killer who will most likely be in the hunter-killer mode and posture. Look at surveillance footage of what armed defenders caught in such situations look like. They tend to keep low behind cover, looking towards the area of the threat. If encountering this potential good guy you need to take heed. If the killer emerges and you draw your weapon this identified good guy may burn you down in the confusion of the ensuing fight. Now you will be in a precarious situation. Will you be able to communicate with the other good guy? If not be conscious of him and his location. Perhaps your best bet now would be to escape to safety as soon as possible since you face the potential of friendly fire.

So, consider these topics when thinking about this most unpleasant of circumstances. Unfortunately we live in such a time. Continue to train for the more common garden variety of criminal attack but also spend some time working the skills that will be required if facing such a dire situation. The active killer dynamic is real and will probably not end in our lifetimes. Prepare for it now and you will be better able to protect innocent life in a worst case scenario.

Previous article: Homeowner Cleared Of Any Charges After Defending Himself During Home Invasion Next article: The SAFE Act Hasn't Saved Anyone, Now One NY Senator Wants It Gone -- Except You, NYC...