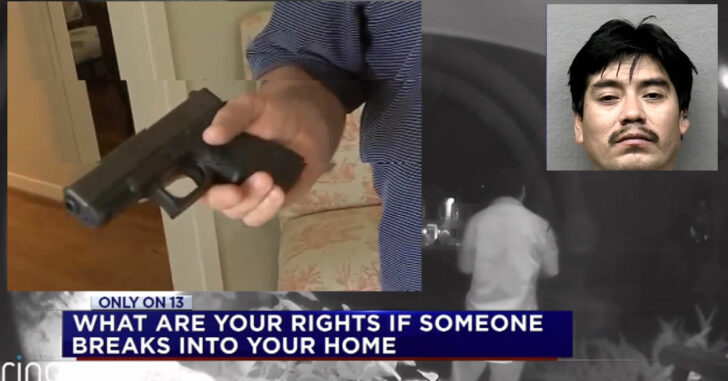 HOUSTON, TEXAS — Captured on home surveillance video, Julio Socoy-Velasquez picked up a paving stone off the driveway of another man’s home and based a pane of glass. He then unlocked the window and entered the home. This is the the sort of situation gun owners constantly envision when dealing with a potential home invasion scenario. The only difference is that, for this home owner, it was now a reality.

In a report published by ABC News 13, the homeowner was able to get his handgun and carefully make his way to the disturbance. In the early morning, he made his way to the living room where he found Socoy-Velasquez. Using proper technique, he managed to evade Socoy-Velasquez’s attention until he was in the right position to move.

“So I come up to the corner, and I look through the glass in the grandfather clock,” the homeowner demonstrated to Eyewitness News. “That’s how I can make out who it was.”

With his target identified, he moved from cover and engaged the suspect with one round from the handgun. The suspect sprang back out the window and rushed down the street. He was captured by police.

Houston police detained the suspect and took him to the hospital to receive treatment for his gunshot would. The round narrowly glanced his head. An inch or two over, and Socoy-Velasquez may not have been running anywhere.

When interviewed by the news, the homeowner credits his years of training at the range and the classes he’s taken on firearms for his ability to react to the home invasion. In the state of Texas, homeowners are covered under a version of the Castle Doctrine. This means they have no duty to retreat against a threat inside their home or property — amongst other conditions.

The difference between a bad outcome and a good one can sometimes be attributed to the level of training and preparedness a person puts into his defensive gun skills. It shouldn’t come as a surprise to any long time gun owner that the more proficient you feel with that gun, the better you will handle it in a real crisis.

Furthermore, I’d like to point out that this man shot the suspect once. Despite not scoring a direct hit, he did neutralize his adversary. The bad guy fled. The homeowner held his fire and let police do the rest.

Home invasions inside nice neighborhoods shouldn’t come as any surprise. Bad guys love going to homes they think will have something of value. The nicer the neighborhood, the more incentive there is to rob it. This homeowner took his duty to protect himself and his property seriously. He spent the time gaining proficiency with the tools he would inevitably use to protect himself.

Previous article: Bound And Gagged By Home Intruder, Woman Wriggles Free And Uses A Gun In Her Nightstand To Fatally Shoot Him Next article: Homeowner Cleared Of All Wrongdoing For Fatally Shooting Intruder -- He Had To Pry One Of His Own Guns From The Hands Of The Intruder