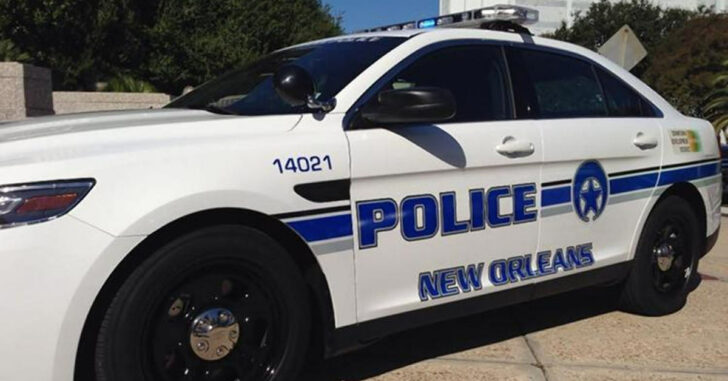 NEW ORLEANS, LOUISIANA — On New Year’s Eve, a would-be armed robber walked into a convenience store and showed the store clerk he had a gun in his waistband. That was followed up by a request for the money in the register. The clerk, however, had a gun and pulled his out. He was gracious enough to walk the fool to the door and told him to never come back.

Well, according to WWLTV News, the fool returned at 12:20 a.m. — twenty minutes into the new year. Feeling perhaps his luck would change, he tried to enter the store again. However, in the preceding time since his first attempt at armed robbery and his second, the clerk apparently told some customers what had happened. When they saw 28-year-old David Vaughn return, one of them got out his gun and shot him and two other customers tackled the man to the ground.

After several hits to the head and a gunshot wound, Vaughn made the very wise decision to go to the hospital. The store clerk, by this point, filed a report with police. After all, gunshots had been fired and there was probably a few questions the police may have in relation to that. New Orleans police showed up at the hospital and took Vaughn to jail. He’ll likely face charges in relation to attempted armed robbery.

One of the things we may be inclined to discount but shouldn’t is the insane amount of dumb luck Vaughn had. He was face-to-face with the barrel of the clerk’s gun and was kindly escorted out. Well, kind is a loose term in this case but the clerk certainly helped him find the door.

His luck would take a precipitous turn for the worst when he tried that same dumb trick again. See, gun owners aren’t impressed by seeing a bad guy with a gun in his waistband. To them, that just means they need to be mindful of where their gun is.

More importantly, when good guys KNOW a bad guy is coming in through the door, they have every incentive in the world to work together. It’s called teamwork. And from an evolutionary perspective, it usually results in longer life spans. Those are little bits of information Vaughn may have discarded when his brain drummed up the brilliant idea to return to the scene of a crime in which he had failed miserably.

Vaughn will have plenty of time to think about this things and more while he hangs out in Louisiana’s finest five star correctional facilities. There, he can learn from a scholarly panel of criminal experts on the pros and cons of robbing armed people.

As for the store clerk, his customers must like him a whole lot if three of them simultaneously jump a bad guy stupid enough to walk back in the door he was only recently kicked out of. And carrying a gun probably doesn’t hurt, either.

Previous article: Former Employees Of Grocery Store Plan To Rob Manager During The Cash Run -- Should Have Counted On The Manager Being Armed Next article: Elderly Man Accidentally Lets The Bad Guy Force Entry Into His Own Home -- Still Fights His Way Out